Midtown. Where the fuck is Midtown? New York? Well yes, and now apparently there is a Midtown London. Not far from where I work in Clerkenwell, a series of large orange and white flags fixed to lampposts line the major thoroughfares running through Holborn, Chancery Lane, Bloomsbury and St Giles. They state that you are InMidtown and in tiny print, grudgingly acknowledge the actual names of the places they are attempting to reframe. The signs have been there since 2010, but don’t appear to be getting any less annoying.

In some ways these banners remind me of the ones that went up around the North Circular and other major routes in and around London during Euro 1996. However, those felt celebratory, exciting and, crucially, were temporary. These flags feel more like a top-down imposition; a crass attempt to redesignate the historic and distinctive parts of London that lie east of Soho.

They are only banners maybe, but in a way these are a soft-power version of Norman Castles – asserting authority, redrawing the map. But who is behind them, what are they for?

Midtown makes sense in somewhere like Manhattan, a North American city built on a gridplan. Uptown is North and where the high numbered streets are found – the Upper West and East Sides, Harlem, Fort Tryon Park etc. Downtown, in the south of the island, you’ll find Wall Street. Midtown then is actually in the middle and home to the 40s and 50s streets, the Flatiron Building, Union Square, Times Square …

In London it doesn’t ring true, particularly as the city has two historic centres – the ancient original one – where once the Roman Wall ringed Londinium – now, more or less, home to the the Square Mile of the City – the city’s financial power base and St Pauls its eastern spiritual focus. To the West, on what was Thorney Island in the Thames, the other London centre – Westminster and Westminster Abbey.

So in historical terms Midtown makes no sense, it is simply Estate Agent trickery on a large scale: take what in pure marketing terms may be obscure areas or perhaps names with unattractive associations and rebrand them. 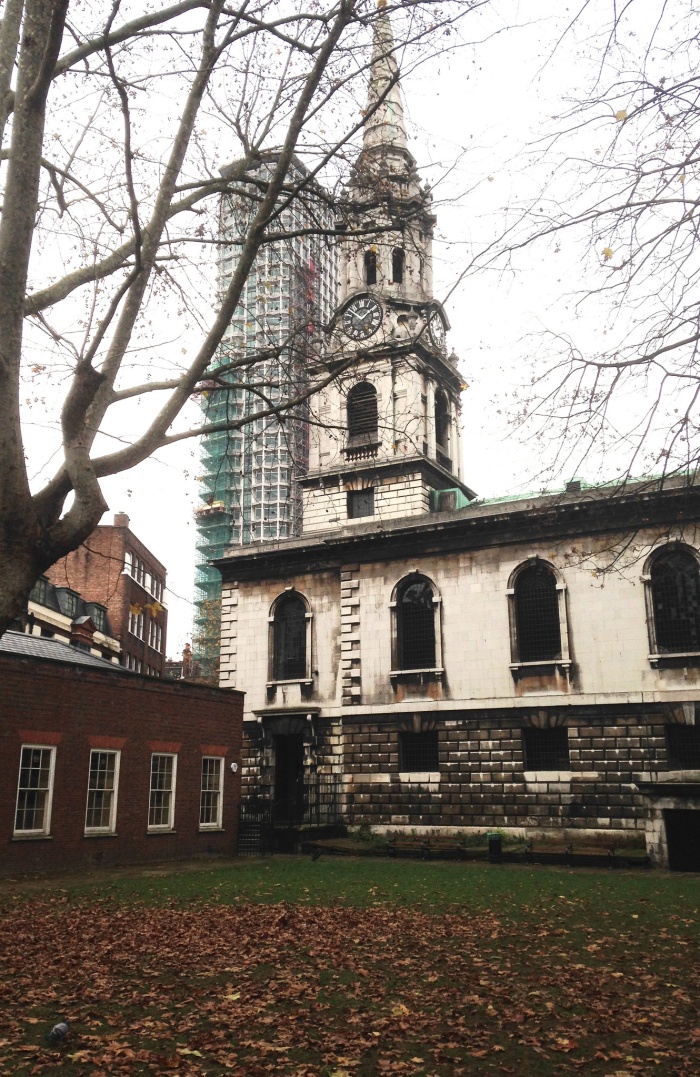 The Venerable Church of St Midtown Without 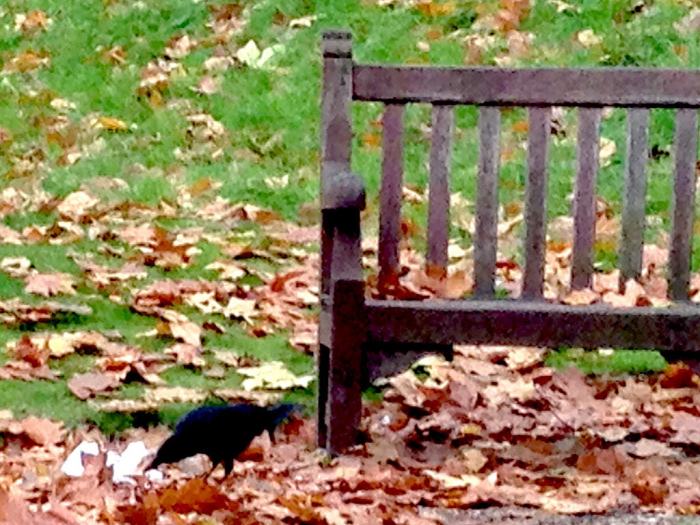 So what? Does it really matter? People have long reimagined London and other cities, especially writers – Gerald Kersh’s Fowler’s End, Patrick Hamilton’s Hangover Square just two examples. But I think there’s a difference. When artists rework cities and places, these tend to be inclusive, shared works to be enjoyed, debated or ignored. The real thing is left untouched except in the imagination.

Cities, particularly the biggest like London are often the canvas for the projected dreams of their inhabitants and visitors. Change is in the very nature of large urban environments like London. As Peter Jukes comments in A Shout in the Street:

“Nostalgia is a product of development in the city. In peasant societies, time is predominantly cyclical, the time of the seasons, of growth and decay: the rural past is like a soil which sustains the present through recurrence and ritual. But in the urban world, time appears irreversible: a linear succession of redevelopments and changes, its past more like the rubble of a building site, bulldozed over, lost for ever. On these ruins of no return the feeling of nostalgia flourishes.”

From A Shout in the street: The Modern City. Peter Jukes Chapter ‘Street as Museum’, Faber, 1990.

When this sort of change, rebuilding and reinventing of small corners of cities happens on a piecemeal basis, or slowly over time, it is easier to accept. In this case though I think it is different. This is an attempt at large-scale rebranding and wiping the slate clean, out with the old buildings, the character and history and in with something less appealing, functional and rather soulless. I may sound a little like an old codger whinging about the past – “do you remember the good old days before the Midtown?”, but Midtown isn’t simply a few harmless flags.

As a Business Improvement District (BID) the organisation InMidtown represents 560 businesses between the West End and the City and is “set up to improve the commercial well-being of a specific geographical area” Is that so wrong? Well maybe not in itself, but this is about commercial interest first and foremost – “BIDs deliver on the local issues that impact on business.” Not issues that other interest groups may be concerned with, or disagree with. And if you are doing this, why change the name of the area you do if for?

This is all about staking territory. This is limiting space, creating artificial borders and declaring ownership. Midtown as a place, if it is for anyone, is for property tycoons and their marketeers, selling space and leasing land to corporate investors or super rich individuals building property portfolios, the Midtown flags the outflow of the corporate dog’s cocked leg.

These are people and institutions who do not give a shit about the history of the area they are in: St Giles – in the Victorian era, site of the Rookery – one of the worst slums in Britain, or Bloomsbury, with its famous medical institutions, Universities and of course celebrated literary associations, with the likes of Virginia Woolf, Dickens and TS Eliot.

In the heart of #Midtown

Global conglomerates and property magnates are interested in square footage, value for money and the proximity of their offices or exec pads to airports, transport infrastructure and high-end restaurants and hotels.

Walking around within the area marked out by Midtown Banners it’s hard not to notice how many signs there are telling you to keep out, don’t stop, don’t enter, stay back. Fences and gates and bars are in, and CCTV is everywhere. This is true of many other areas in London and across the UK as a whole, but seems even more noticeable when thinking about an attempt to reconstitute an entire area. 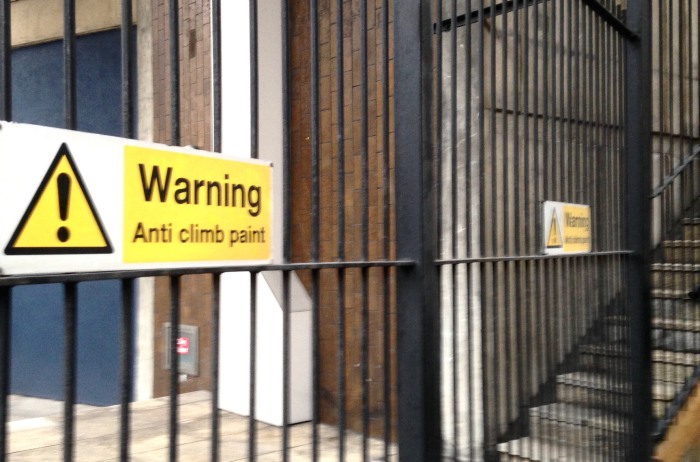 Of course there remain many open spaces, squares, small parks and gardens within the bounds of Midtown. Red Lion Square, The Phoenix Garden, Bloomsbury Square Gardens to name just a few. But trying to wrap them up within a new, unwanted, artificial London area feels wrong.

A chair with something to say

In the Phoenix Garden 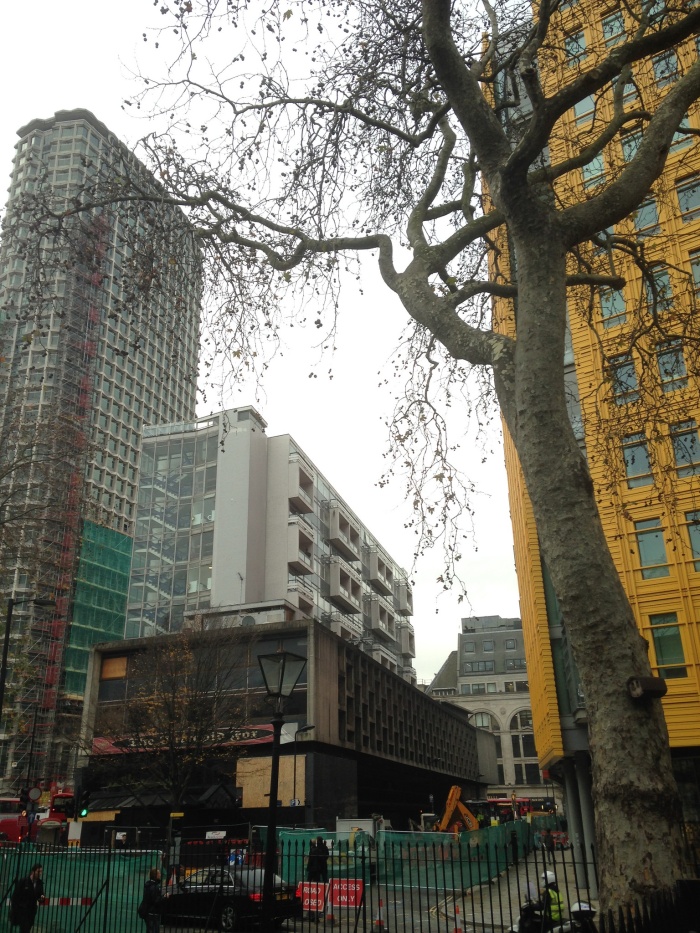 First replace the historic and interesting buildings with bland and boxy towers, then change the name of the place 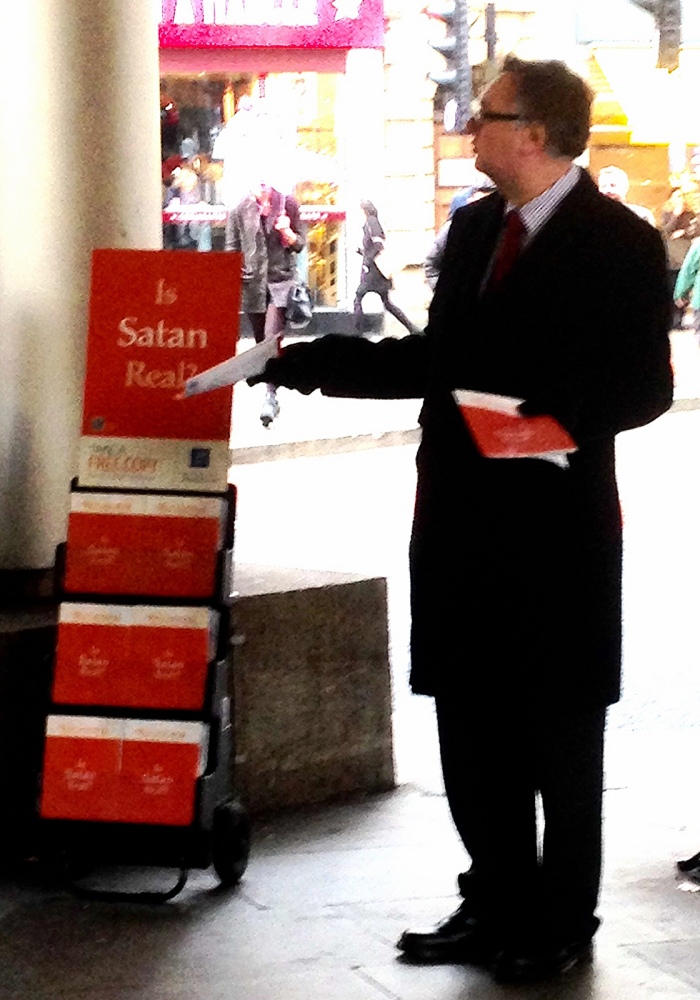 In many ways Midtown’s shadowy, quangoy efforts at rebranding a whole swathe of London, simply reflects our increasingly top-down, stratified, corporatised society as a whole. It smacks of football stadia being renamed after sponsors, shopping centres, or redevelopments being branded as ‘Merchant’s Quarter’, or ‘Regent’s Quarter’ and patrolled by security to regulate or stop free movement. Streets change, the nature of space is changed.

This sort of rebranding is also sometimes known as ‘placemaking’ as this Guardian article by Dan Hancox on Gentrification explains: “Sometimes this is called place-making, and amounts to extravagant marketing exercises that seek to brand (or rebrand) an area, to follow in the footsteps of the advertising industry and sell not just a product, the bricks and mortar, but an entire aspirational lifestyle.”

Midtown with and its equivalents elsewhere with their developer-imposed renaming and reshaping are little local versions of the 1972 local government act, which scrapped whole historic counties and and replaced them with new boroughs and unitary authorities,  redrawing borders for political convenience. Although in this case to suit developers’ ends.

The website for InMidtown wouldn’t agree, it tries to show understanding of the history of the areas it has pulled together, but you don’t have to read too far to see what the organisation really cares about. In the Discover section the intro reads:

Midtown: an historically rich area in the middle of town, where Bloomsbury, Holborn and St Giles bring together a fascinating mix of cultural institutions, historical attractions and world-leading companies.

World leading companies is the giveaway here. Visit London, stroll the historic streets and bow down before towering glass and concrete erections of world-leading companies.

Even worse are some of the Midtown tweets:

Artists, architects, diving pioneers and celebrated clock-makers all lived and worked in #Midtown Find out where: http://t.co/iUDjIZyPlg

No. Dickens never went on night walks through Midtown. Virginia Woolf didn’t go wandering in search of a pencil in Midtown. I’d imagine they’d have been rather bemused if they’d seen the flags declaring that that is where they were.

The concept even has journalists unwittingly talking in terms of colonisation and takeover as they write tosh like this:  “The Midtown name falls increasingly easily from the lips of the new breed of hoteliers and restaurateurs who have colonised the area in recent years. The new five-star Rosewood on High Holborn — recently named AA London Hotel of the Year and one of the capital’s most successful launches in decades — describes its fortnightly cabaret nights as “adding a bit of mayhem to Midtown”. More than perhaps any other opening, the Rosewood has put Midtown on the map with the beautiful people…Last week Midtown received arguably its most telling hipster seal of approval with the opening of the Hoxton Holborn hotel in a former BT office building at the hitherto rarely explored western end of High Holborn”. – Jonathan Prynn, Consumer Business Editor, The Evening Standard

Oh do shut up. “Little explored western end of High Holborn”? – what apart from the thousands who work and live around there? Jonathan why don’t you take your regurgitated press release with it’s “Mayhem to Midtown” and stick it somewhere else even more rarely explored?

The saddest thing about this attempt at renaming, or rebranding, historic areas is that in many ways it is simply a reflection of the physical reality on the ground. As great swathes of this area and other parts of central London (and no doubt on a smaller scale in other towns and cities in the UK) – are torn down and built over, the buildings, places and spaces that made them feel distinctive in the first place are lost.

As each grimy, Gothic Victorian block, Georgian house, or original street layout – along with the venues, small businesses and human scale spaces set around and within them, are flattened and replaced with ever taller, increasingly homogeneous and unimaginative box blocks – the places that emerge look more and more like everywhere else – scenes from a generic city that could be anywhere. There’s an excellent, eloquent and mournful eulogy to the lost streets and distinctive atmosphere of St Giles by Peter Watts here as Crossrail and coat-tail hanging developers lay waste to Denmark St, Hanway St and other blocks and buildings in the area.

Once the sites and sounds and feeling of a place that made it feel like somewhere in particular have gone, the old names for it become less and less relevant. The more parts of London that start to look and feel like they were knocked up in a SimCity gaming session, the less it matters what they are called – Midtown or any other generic empty names you care to imagine.

Fortunately at street level all is not quite lost, the area, further east at least, still has some character to it, whilst on maps and road signs, Midtown doesn’t figure. So if you are passing through, unless you are a certain type of restaurateur, or property tycoon, you’ll still be in St Giles, or Holborn or Bloomsbury. So rather than wonder where the fuck Midtown is, simply think Fuck Midtown.

There’s no map of Midtown

Midtown – who wants it. Evening Standard article featuring people who like the idea of Midtown.

Peter Watts on the destruction of St Giles