For anyone who is interested in what I am reading/have read (or remember having read) there’s a link to Good Reads on the blog home page.

I had wanted to use these pages to keep a record of every book I bought, borrowed or came by, along with where and how. It has proved beyond me to keep up.

In an ongoing quixotic effort to prevent Amazon from pricing everyone else out of the market, I buy books from many different places – but such is the unhealthy need to get the next book, sometimes I still buy the odd thing through them and the associated ABE books.

So instead of regularly updating a log of shops, I’ve listed some of my more regular haunts and favourites below the photo, while here is the story of where my  obsession began. 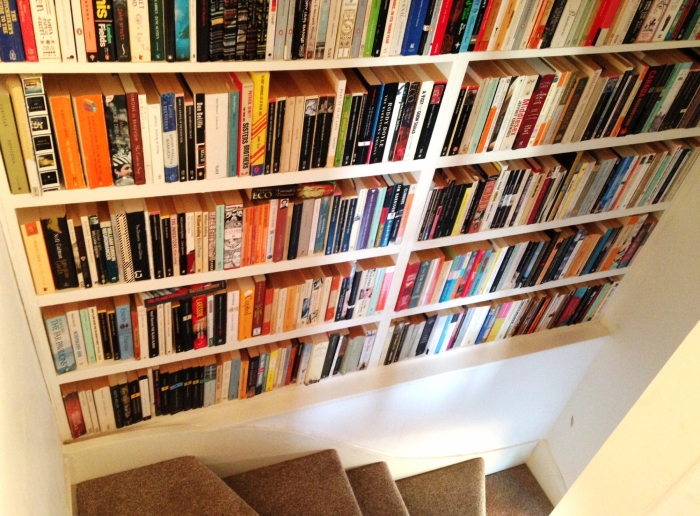 Paperback fiction creeping up the stairs

More often than not I’ll buy books from one of the following – Foyles, Charing Cross Road HQ, The Bookseller Crow (my brilliant local) on Westow Hill, Crystal Palace, Skoob, underneath the Brunswick Centre.

I’ve always liked visiting Walden Books in Chalk Farm – which according to urban legend is the inspiration for Channel 4’s Black Books. I’m not so sure, but it is in many ways the archetypal second-hand bookshop: books spill out of over stuffed shelves, cheaper books on tables outside entice you in, there’s always something new to discover. And it has/had this fantastic quote on bookshops from John Cowper Powys: 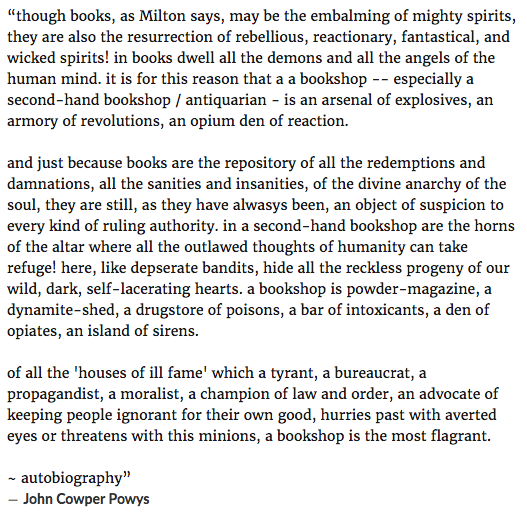 A great little indy in my old neighbourhood is The Big Green Bookshop in Wood Green.

As I’ve noted in this blog post – Topping & Co in Ely is one of the finest new bookshops around.

Whenever I’m lucky enough to visit New York I love to spend some time in The Strand Bookstore one of the largest independent bookshops in the US.

Other than that it depends where I am, but if there’s a bookshop nearby, I’ll have to go in.

We moved at the end of May. Now we’re in, there’s more space for more books.

Bring up the bodies
Hilary Mantel

Psychogeography
Will Self & Ralph Steadman

The People’s Songs: The story of Modern Britain in 50 records
Stuart Maconie

A ‘quick peak’ at ABE books resulted in the following splurge:

The Death and Life of Great American Cities
Jane Jacobs

Camden Lock Books, Old Street
Had been meaning to visit for ages, but hadn’t got around to it. Now working nearby so have no excuse.
It’s pleasingly packed with stock – some tottering in small piles in front of the shelves. There’s also a small, cupboard-like second-hand section out back.

The Secret Life of Trees – Colin Tudge
Three Sheets to the Wind
300 Bars in 13 Countries, One man’s search for the meaning of Beer – Pete Brown
Wordsworth Selected poems of Lord Byron

Carson McCullers, The Heart is a lonely hunter

Into the wild, Jon Krakauer

Read the first sentence, paragraph, page and was hooked. Deserves a late review post some time soon. Finished a couple of days later.

Set along a stretch of the Regent’s Canal between Islington Tunnel and the Hackney, the novel centres on two characters, between whom, in terms of action, for most of the novel nothing much happens – but this would be an entirely superficial reading. Beneath the surface, teased at in the dialogue, whole lifetimes of anger, regret and sheer boredom gnaw at the protagonists until, as if the intensity of these suppressed emotions has got too much, things finally reach boiling point, as the novel reaches a genuinely shocking, but not quite conclusive moment.

In some regards The Canal is a study of boredom, but it makes for compelling reading. Rourke’s deceptively simple style and spare prose says an awful lot with a little.

The fact that much of the action takes place within such a small and particular area adds much to the intensity of the story. Reminiscent in some ways of a Pinter play, where as much can be read into the gaps between speech or narrative as in the prose itself, the novel is packed with beautifully observed – though often awkward or even violent moments.

Where Rourke excels is in his ability to capture a very real sense of those inbetween places, or non-spaces, in our lives which we all too frequently pass through without ever properly regarding. An outstanding debut and well worth picking up and reading.

No spare space in the car for bringing back anything we didn’t take with us, so am merely browsing in the Rough Trade tent. Don’t have any money to spare anyway.

Walk out having bought Hops and Glory by Pete Brown, who’s previous book Man Walks into a Bar (a sociable history of beer) I’d read and enjoyed a couple of years ago.

Lunchtime visit to Skoob in Bloomsbury. 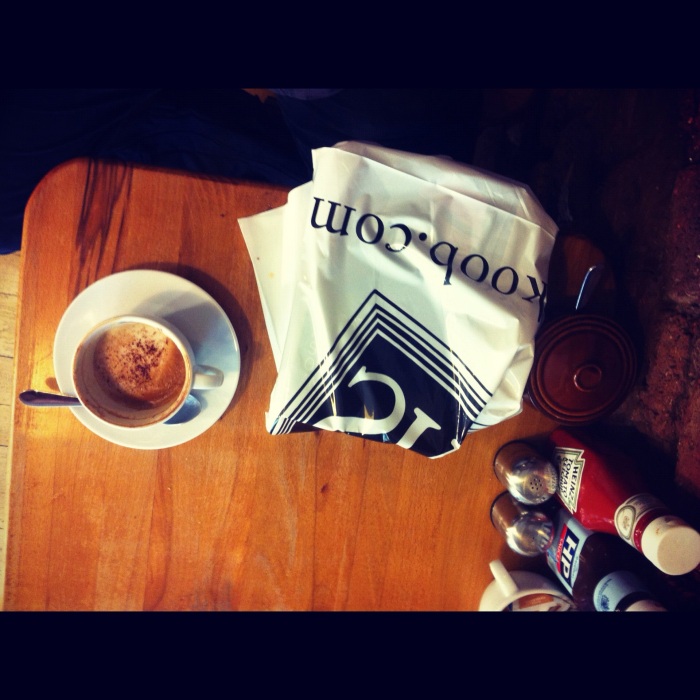