A squashed gothic church, beheaded saints, statues drowning in quicksand and a preponderance of dustbins.

Brooke’s Market came at me out of nowhere.

Not from behind with a cudgel, but as a subject.

I’d passed through it often, sat down in it several times, though I’d never really stopped to take it in. This small, shadowy, grey concrete square was a useful cut through from Leather Lane to Holborn. The epitome of non-descript.

Viewed from above on a Google map you get no clue about what it is, or how it feels – from this tech-giant bird’s eye perspective, Brooke’s Market is a square plot covered in an early summer tree canopy, perhaps a small park or a garden.

Then one morning, as I sat on a bench there, hastily unwrapping a packet of pre-work marmite toast, I saw the place differently. Not in a stunning, revelatory sense – this wasn’t stumbling into Shangri-La off a side street in Holborn – but, on that day, in an instant, something about the place, its atmosphere and previously anonymous buildings, jarred and caught my attention.

At first glance Brooke’s Market is an unremarkable collection of black iron benches on a bubble-gum spattered, paved rectangle of ground, with a few bins, recycling units and a bright green donation bank for clothes.

Sometimes the benches contain an office worker, fiddling with their phone on the way to somewhere else, while another with nowhere in particular to go might sit and stare at the ground. Often there is no one else around at all.

A group of London Plane trees loom overhead, adding further long shadows to those cast by the tall buildings running almost continuously around the edges of the square. A single manky pigeon might be found shambling about the fringes, but typically, with only empty plane trees to settle on, there’s no birdlife to enliven the gloom.

Even in the immediate vicinity there are far more obviously interesting places to be. A short stroll to the east is the curious Ely Place with its Beadle’s Gatehouse and hidden, Ye Olde Mitre pub and occasionally accessible cut-through to the mythic-sounding Bleeding Heart Yard.

Running behind the square, is Leather Lane. A bountiful stretch of groaning food stalls and shops, offering an array of global cuisines; including perhaps the widest choice of falafel providers outside the Middle East.

A short walk in the other direction, is Gray’s Inn. If you seek pleasant views, green lawns, wildlife and fecund foliage in this part of central London, then the ‘The Walks’ as the Inn’s gardens are also known, are your best bet – so long as you only want to visit between 1230 and 2pm and are not ‘a hawker, a child, or a ‘disorderly person’.

In London terms, in any terms, this spot is less than ordinary – no tourist itinerary would feature it or miss it. And yet…there is something pleasingly intriguing about this discrete little square.

The lack of grass and foliage – aside from the ten London Planes that tower above it – coupled with a solid wall of tall buildings that encircle the central area, lend the place a hemmed-in New York-ish feel, though without a sandy dog run in the middle. Access for cars isn’t easy and the resulting lack of traffic noisily speeding through adds greatly to the site’s hushed appeal.

Unusually for a public space in central London there are loads of bins, almost two per-bench. The practical reason for this may be due to the proximity of Leather Lane – lots of passers by with food wrappers – plus the presence of The Lodge at St Ursula’s – a St Mungo’s hostel for older rough-sleepers to one side of the square. In their lumpy, grimy way, the square’s dustbins are perhaps encouraging passers by to slow down, stop and stay a while. 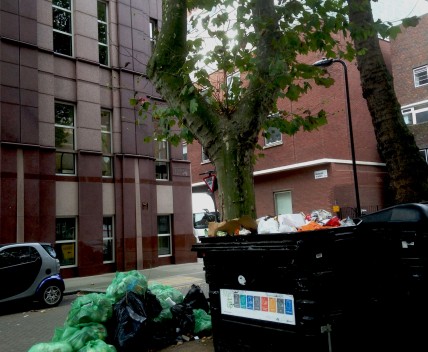 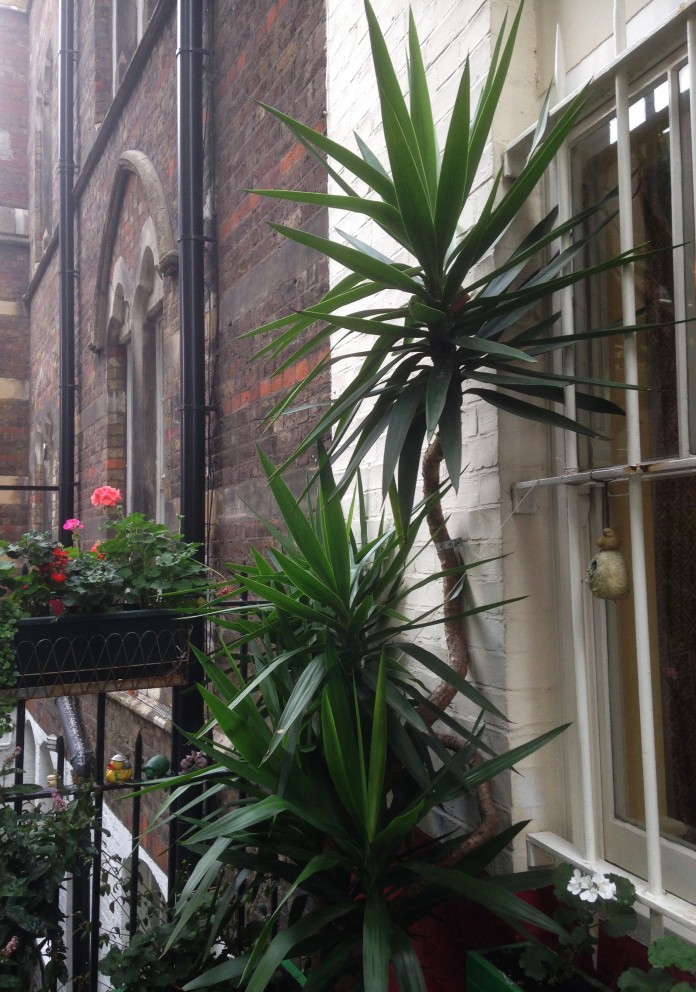 As you face The Lodge at St Ursula’s, there’s an arched alleyway to the right, Leigh Place, which leads towards Baldwin’s Gardens and a Primary School, but in the customary half-light of Brooke’s Market, it looks exactly the kind of route a breathless suspect might duck down with Holmes and Watson in hot pursuit, on a fog-bound autumn night. 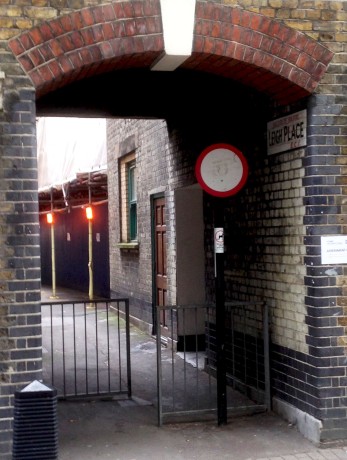 To the left of the hostel, and contrasting with its lime-white walls, the soot darkened, red and yellow bricks of St Alban the Martyr, stretch up and up – in one direction forming the church’s hulking tower, in another eventually tapering into a gabled roof with turrets, topped with a crucifix – and just a little lower down, mammon’s TV aerial.

St Alban’s grand scale crammed into a tight spot, give this half-hidden Neo Gothic edifice an uncomfortably, squeezed appearance; like a fat parochial priest squashed into the corner of a Southern Train vestibule. 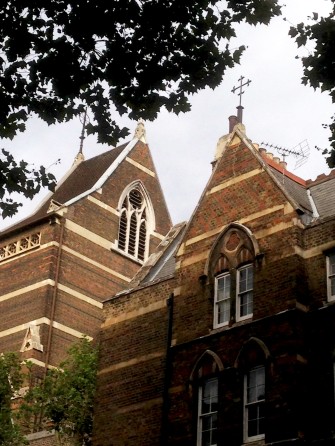 Built between 1861 and 1862, the church was damaged in World War II and restored by Adrian Gilbert Scott – grandson of Sir George Gilbert Scott, the architect responsible for one of the very finest Gothic Revival buildings of all, the Midland Great Hotel at St Pancras.

As for St Alban himself, he was supposedly beheaded at some point in the 4th century in the Roman City of Verulamium (today’s St Albans) for aiding and abetting a Christian preacher fleeing the local authorities. For his trouble, and his head, Alban is now honoured as the first British martyr.

Hard by the western corner, and difficult to see until you are right upon it, is a lane leading out to Gray’s Inn Road; pass along here during call to prayer times and you’ll see groups of men kneeling outside Holborn Mosque.

On the way, to your right, through a tall black wrought-iron gateway you can catch a glimpse of the imploring arms of Hans Feibusch’s ‘Jesus being raised from the dead’ on the wall of the church’s south transept. Rather than Christ reaching out, I can’t help but see the sculpture as that of a petrified man being pulled back through the wall; either that or its someone drowning in quicksand. Maybe that’s the point. 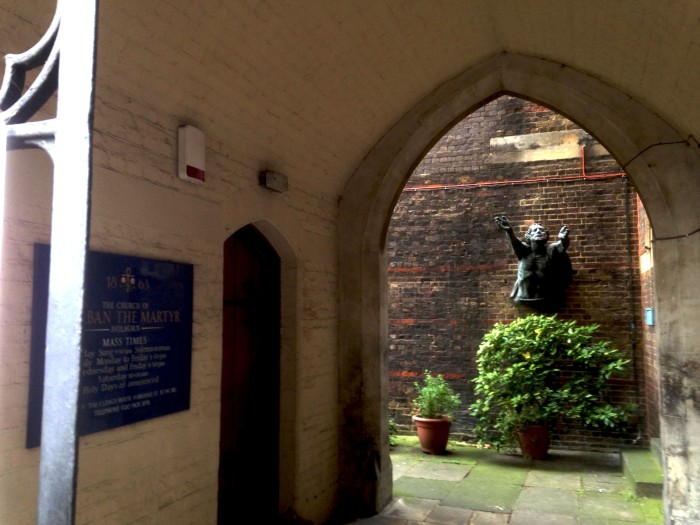 Next to this at the square’s western end are the balconies of a small council block on Brooke St. These also look as if they’ve been squashed down into place layer by layer, making the flowers outside flats look a little like jam spurting out of a Victoria Sponge.

Opposite these, across the central ground are the red brick twin gables of the Cranley Buildings. According to historian Martin Stilwell, in Housing the workers: Early London Council Housing 1889-1914 these buildings were part of a late Victorian slum-clearance scheme in the area. The name follows a fashion in the borough council’s urban development at the time for naming council blocks after towns in Surrey.

Completed in 1897, the Cranley Buildings (the Surrey village – the largest in England so they say – is now spelt Cranleigh) were a little unusual for such blocks at the time in that they were only three rather than five storeys tall. However by 1901 the buildings were full and home to a varied group of people:

Today around the corner from here, a part of the Bourne Estate is being redeveloped, though unlike in the 19th century, few of the flats being built as part of ‘The Camden Collection’ will house the poor of the borough.

Finally, the fourth side of Brooke’s Market is completed, on Beauchamp Street, by the massive purple marbled blocks, and glass walls that comprise the back of The Prudential Building. The glossy planes of these hard slabs of post-modernism make for a sad contrast with the building’s red brick palatial Gothic Revival facade on Holborn. 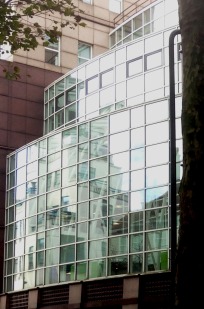 Yesterday I went back to take some photographs for this post and, this time, there were people sitting on the benches, two of them. One, a young man with big, long dreadlocks, in tears, occasionally so overcome by sobbing that he bent his head into his lap. Next to him a small, neat looking woman was trying her best to comfort him.

The scene unfolded in near silence, as if the figures at its heart weren’t fully present, this silent play of negotiation and comfort continued for a long moment until the sudden, insistent bleating of a reversing dustcart broke the atmosphere.

Unfrozen, I left them to it.

2 thoughts on “A dark square with potential: Brooke’s Market, EC1”