At the bottom of Gipsy Hill in South East London there is a small triangular field, just about the size of two football pitches. To the casual observer it is a fairly anonymous looking, unremarkable patch of ground. Like many such places, when looked at a little more closely it reveals layers of hidden depths. Today the space is known, on its signage at least, as Long Meadow, but it is a field in the dictionary sense, in that it is an area of “open land typically bounded by hedges or fences”.

Long Meadow is a different kind of space from a more formal public park – there are no manicured flowerbeds, duck ponds, bandstands and only a small playground at the southern end, with its own separate entrance. The playground is a recent addition, having long been the subject of debate between parents and dog owners on local online forums. Largely the rest of the place remains the preserve of dogs, their owners and walkers.

I walk past often, but rarely go in. Sitting right on the border of the London Boroughs of Southwark and Lambeth, Long Meadow isn’t especially attractive, but I like the fact that it is there – a stray patch of public, tree-lined green space amongst marching rows of suburban streets.

Recently a book and a blog post that I read, stirred me to find out a little more about this stray field. One was naturalist Tim Dee’s excellent book – Four fields in which he meditates on the idea and reality of the ‘field’ – that most ancient of human constructs.

Dee explores four very different enclosed areas of land. His fields are: Wicken Fen in Cambridgeshire – drained and half-tamed by 17th century Dutch Adventurers and generations of folk that came after, an area of bush in Southern Zambia, the site of the Battle of the Little Big Horn in Montana – in the midst of what was once mile upon mile of Prairie Grassland – and finally, the radiation scarred landscape around Chernobyl, replete with discoloured forest trees, genetically warped birdlife and houses empty of human inhabitants.

Dee’s beautifully observed thoughts and descriptions filled me with a desire to visit all four of his fields, but also to look more closely at others nearer to hand. This line from the introduction alone invokes in me a kind of magical calling to run out to a field, any field:

“Fields are ordinary, universal, tamed and practical, but they are also none of those things or their opposite: they are strange, particular, wild, and as far beyond money as human-inflected things can be.” – Tim Dee

The other reading that made me think about Long Meadow was a post on the Landscapism blog – The Last Field in England, in which the author (who had also been reading Four Fields) sets out to explore a field near Chepstow, on the border with Wales.

“There is something both inviting and slightly daunting in the thought of studying the micro-landscape of a single field. A small matter for a master such as Richard Jefferies who can devote a whole chapter to dwelling on the minutiae of the topography, flora and fauna of the ‘homefield’ in Wild Life in a Southern County, but more of a challenge to most of us, lacking the innate knowledge of the Victorian country-dwelling naturalist.” – Landscapism

Thus inspired I set out one Sunday morning to see what strangeness might await discovery on closer inspection, within a superficially, non-descript muddy field in South London. 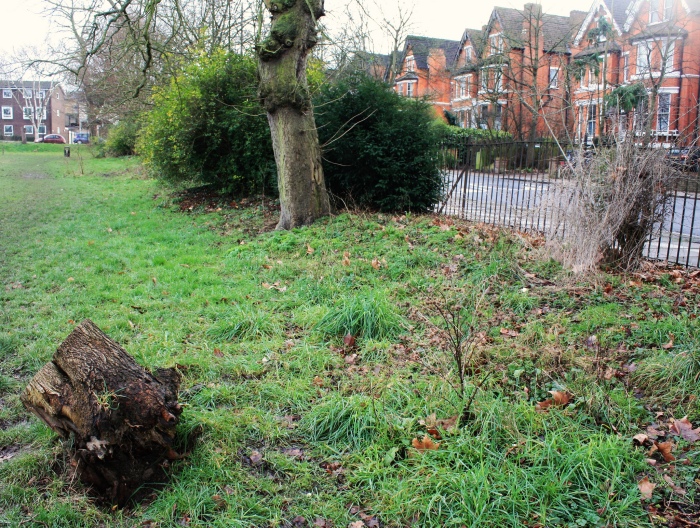 Feeling conspicuous with a camera in hand rather than the requisite dog, I lifted the latch on a gate on the Gipsy Hill side and sidled in. Only then did it occur to me that this was the first time I had actually set foot inside. On a wet sunday morning Long Meadow was disconcertingly quiet, with no one else around, but well-trampled muddy trails showed the most popular routes around and across the field.

Closing my eyes I tried to get a sense of history, but felt nothing. All I could hear was a distant hum of traffic and what I thought was the repetitive two-note song of a Great Tit, soon followed by a grumbling chattery, call, as if the bird got fed up with it: “Ach this morning’s not worth a song.”

I tried to see which tree the Great Tit was in but couldn’t make it out – a tallish grey one, that might have been an ash or elder on the opposite side from where I stood. Annoyed at my inability to tell exactly what trees and shrubs were lining the place I walked towards what I thought was a Hawthorn, excusing the rest by reminding myself that its winter and without leaves its harder to tell.

I took a few photos and crossed to a gate on the Dulwich Wood Avenue side of the field, noting some early Daffodil shoots – hah I recognise those – and made my escape, little the wiser. 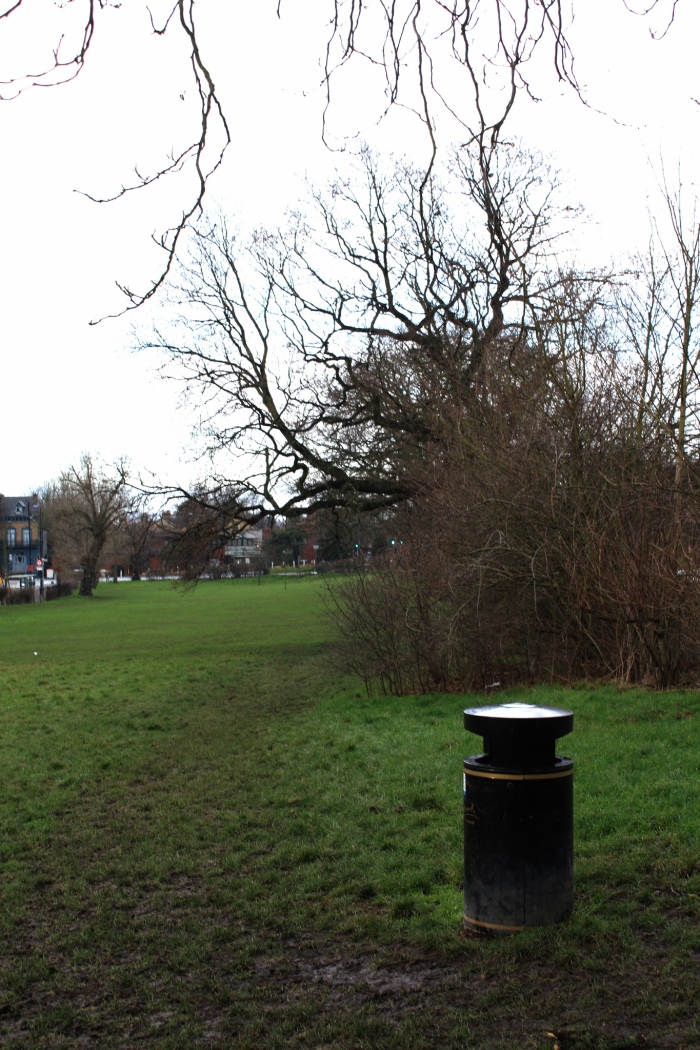 Having failed to learn very much when literally out in the field, I turned to books and the web. Bingo. With just a few clicks I was able to discover a good deal more and Long Meadow’s historic depths became apparent – although not via Southwark Council’s Park’s In Your Area page which, unlike the links to further information on some other spaces, merely lists the place, a kind of municipal shrug.

However, more detail and history was not far away, not least that Long Meadow had been known by other names over the years, including Belle or Bell Meadow, Hunter’s Meadow and French’s Fields.

This last name was after, Thomas French of Croxted Road, a farmer who kept his cows further up Gipsy Hill – the building is still there, around half-way up, between Woodland Road and Cawnpore Street. (There’s a photograph of cows in the field on the Lambeth Landmark photo archive site). The fields were known by his name at around the turn of the 19th Century. Another farmer James Bacon of Elder Road also grazed his stock on the field in the ‘latter half of the nineteenth century.’

Intriguingly there were rumours that nearby Paxton Roundabout – at one end of Long Meadow, was the site of a Lambeth plague pit. There seems to be no proof of that, but the roundabout – still grassed – was once a small triangular field and also used to graze cattle, perhaps by Messrs French and Bacon.

Nearby Gipsy Hill and Gipsy Road are named for the Norwood, or Lambeth Gypsies who used to camp nearby. John Coulter in Norwood Past devotes a chapter to these ‘Woodlanders’ who from the seventeenth century attracted all kinds of visitors to this once bosky region south of London, including Elizabeth Pepys, Robert Southey and Lord Byron. Coulter mentions a favoured meeting place – the originally named – Gipsy House – “a rude tavern that stood in a clearing towards the bottom of Gipsy Hill”. A drinking den that must have been near, if not on, Long Meadow.

I also later learnt, from Jon Newman’s fascinating book River Effra: South London’s Secret Spine that the Upper Norwood branch of one of South London’s most notable lost rivers, ran through Long Meadow – still shown on plans in the 1860s emerging from a culvert under Crystal Palace High Level station, where it turned sharply down Farquhar Road and on downhill , reaching Long Meadow after passing under Colby Road and Dulwich Avenue. From here the stream rejoined Gipsy Hill running down under the roundabout and on a meandering northward course until meeting the Lower Norwood Branch of the Effra near the junction of Croxted Road and Thurlow Park Road. Newman notes that “As well as marking the boundary between Lambeth and Southwark on the west side of the road, the river along South Croxted Road also defines the edge of the Dulwich Estate.”

It turns out that this apparently undistinguished little urban field, has a rich and fascinating history after all. Long Meadow may not possess quite as distinguished a story as those of Tim Dee’s fields, or even Landscapism’s Last Field In England, but is in its own undemonstrative way, is quite a remarkable little place. Especially as its destiny could so have been so different.

The poet Edward Thomas once lamented the march of urbanisation in Balham a few miles west, as what had once been fields and woods in Surrey, vanished as they were eaten up by the greedy sprawl of South London: ‘it is pretty bad – all the mean or villa streets that have filled the semi-rural places I knew 25 years ago.’

The fate of Long Meadow, so far, has been different. The gipsies may be long gone, cattle are no longer driven downhill to graze there, but their former pasture remains; fenced in, but not built upon. This, above all else, I think is what makes Long Meadow special –  the simple fact that it is still there.

Gipsy Hill in the early 19th Century with Long Meadow to the right (http://tinyurl.com/6pvkkk))

The Last Field in England – Landscapism

3 thoughts on “A Stray Field in South London”