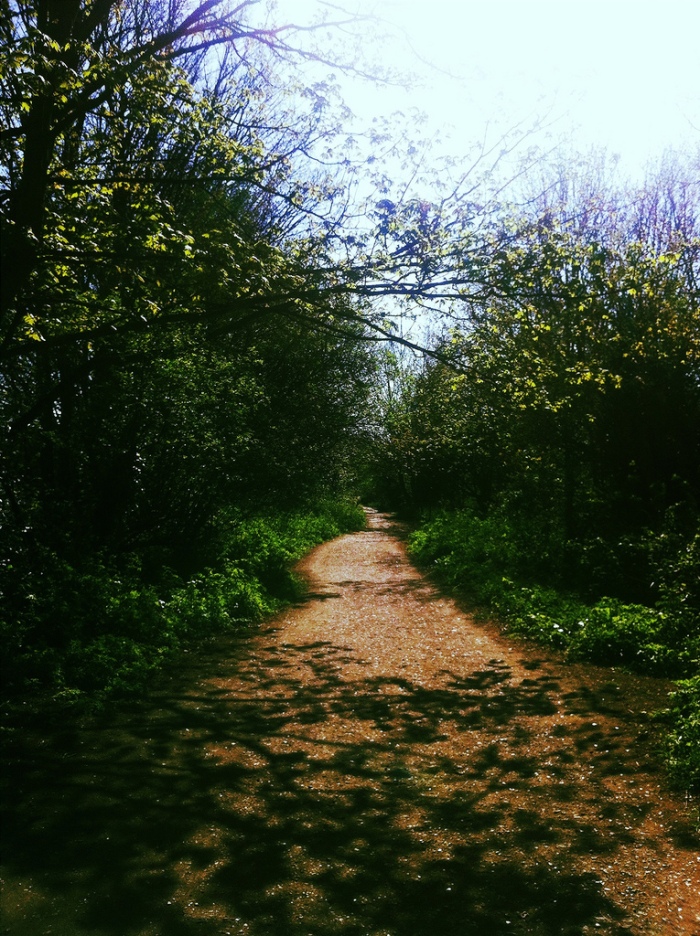 Rudyard Kipling, The Way Through The Woods.

Beyond blunt economics there are few clear benefits to closing down a railway line. In Britain the loss of a former branch or main line – whether due to Beeching’s axe or otherwise – tends to be mourned.

Yet, in a few places, the end of the trains has had a small positive side-effect: the creation of a public footpath. One good example of this is Parkland Walk in North London.

In Bristol, where I grew up, a section of the old railway line to Portishead is now part of a planned walking route – The River Avon trail. A stretch of this runs along the foot of the Avon Gorge beneath Leigh Woods. Look skyward at the right spot and you can gaze up to the underskirts of Brunel’s Suspension Bridge, the city’s iconic landmark. A little further on and you pass through an old train tunnel through the rocks.

As a teenager walking along this path I remember experiencing a brief moment of doubtful panic as we entered the tunnel – what if we were wrong? What if trains did still pass through this way? Having recently watched Stand By Me, the bridge crossing scene sprang to mind and I didn’t feel entirely at ease until we reached Pill and pavement clearly intended for pedestrians.

Parkland Walk runs for around three miles between Finsbury Park and Highgate in the southern section and then with a gap before the northern section continues on from Cranley Gardens to the edge of Alexandra Palace park.

Before it became a walk, the line was once a branch of the Great Northern Railway. According to Nigel Welbourn in his book Lost Lines: London, in the 1930s plans had been mooted to transfer the line to the control of the Underground and make the route part of the Northern Line, but the idea was dropped after WWII. Crouch End station closed to passengers in 1954 and all freight traffic in 1970. Stroud Green Station closed in 1954. A fire in 1967 destroyed most of the building – which stood at the bottom of Ferme Park Road on the junction with Stapleton Hall Road – the rest was recently demolished to make way for a new development. The former station master’s house is still there on the opposite side of the road and is used as a community centre and charity offices. 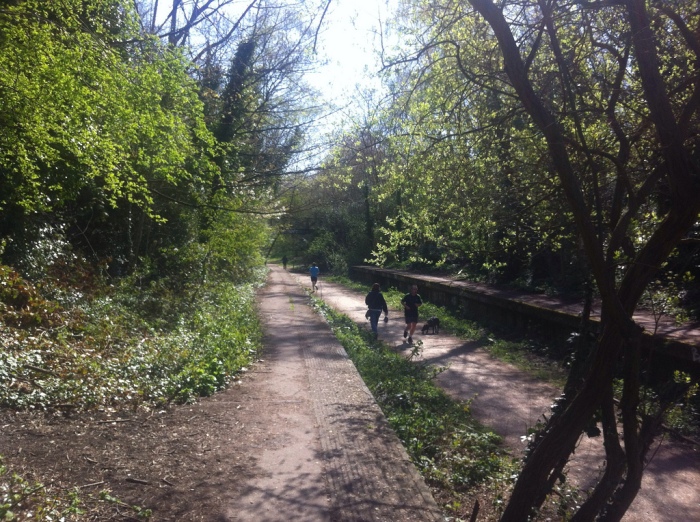 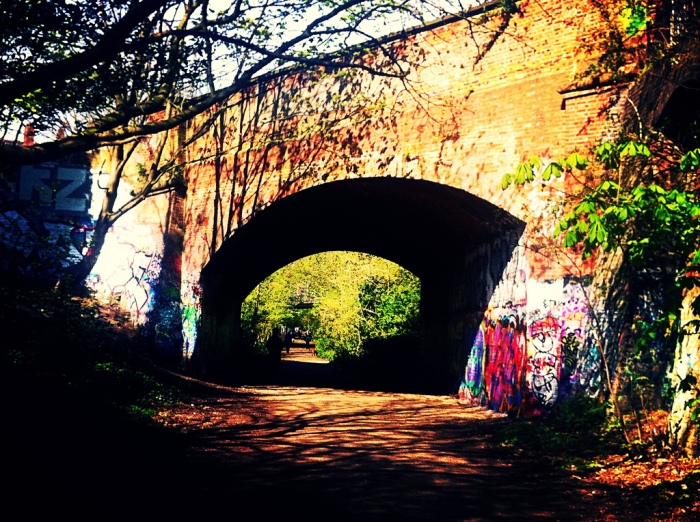 Now using one of the many entrances it’s easy to leave the side streets of Haringey, or in one small stretch Islington, and pretend you’ve slipped out of North London and into a slither of countryside. If you just squint a bit and turn your head at the right angle you could almost believe that you’re on some Hardy-esque drovers’ path, or leaving The Shire on the East Road. That is until the dog shit and plastic bags waving in the trees snap you out of it.

I quite like the place for its utter inbetween-ness. An elevated former railway line, cutting through a large swathe of North London that allows anyone on it to glimpse through the bushes to the lives of those in the houses and streets that back onto the path.

However, it’s a very, very leafy and suburban kind of ex-railway line. If you’re after the thrill of passing through ‘the city’s ripped backsides’, as Iggy Pop styles it in The Passenger you won’t find it here. Parkland Walk is too far from the centre of things to conjure a spectacular juxtaposition between semi-wild green space and the city around it. For that you’ll need to visit somewhere like New York’s High Line, running through and over the streets of western Manhattan. Or in London, take a ride on the Highbury to Shoreditch High street section of the East London line, which until recently was itself a disused stretch of former railway – though as you pass through Haggerston and Dalston these days it’s more a case of the city’s gentrified backsides.

Up in London’s Northern Heights things are rather more sedate, with the facts of urban life intruding less obviously onto the former tracks. Look beyond the Buddleia and Cow Parsley though and they are there: back garden incursions onto public land – a little extra ground nicked off here and there, or more blatant abuses such as the dumping of unwanted garden refuse, old mattresses or worse. 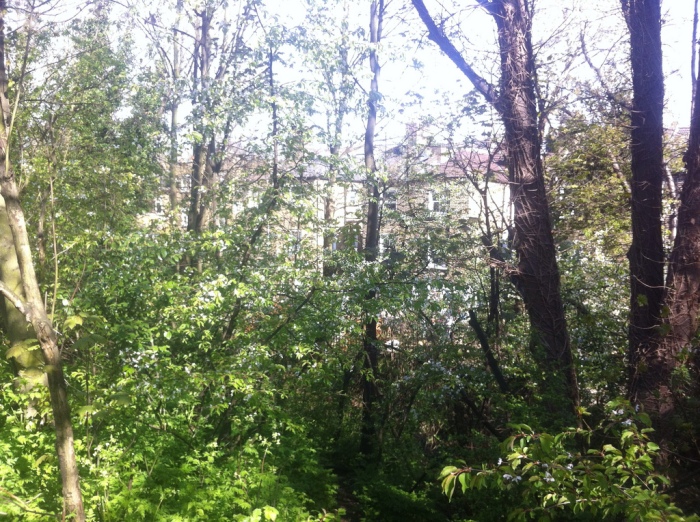 Then there are the people. Parkland Walk doesn’t seem to suffer from the almost open warfare between Cyclists and pedestrians that exists on parts of the Regent’s Canal, but there’s a similar range of users. Depending on the time of day – late morning to early afternoon being peak hour here – cyclists mix it with dog walkers, families of strollers, Twitchers, Tai Chi practitioners, wailing toddlers, bored teenagers, earnest Crouch End graffiti artists – cursing in their finest mockney patois – and some simply escaping the city for five minutes a fag and a spit.

There are also lots of runners, many of whom, in unconscious tribute to the land’s former railway status, progress along the path as if fixed on some kind of rails themselves and find their pounding legs unable or unwilling to deviate from their invisible track. I’ve seen one or two sent flying by dogs, or other people who are not so focused, or ‘in the zone’ and instead amble absent mindedly across the path of the oncoming tracksuits.

Of course being in a big city, later at night, though sometimes in the middle of the day, Parkland Walk attracts others with more furtive purposes, but on the whole if you want some space to think, run or walk it’s an uncommonly pleasant place to be.

As you progress along its course there is an extraordinary range of plant life to take in on the walk – including an area of precious south facing acid grassland which plays host to such creatures as the rare cuckoo bee and the mining bee.

The trees that grow alongside the track play a big part in the route’s atmosphere, in some places almost reaching over to each other and forming green arches. The variety is great – with Alder, Ash, Oak, Rowan, Wych Elm and Yew just some amongst their number. 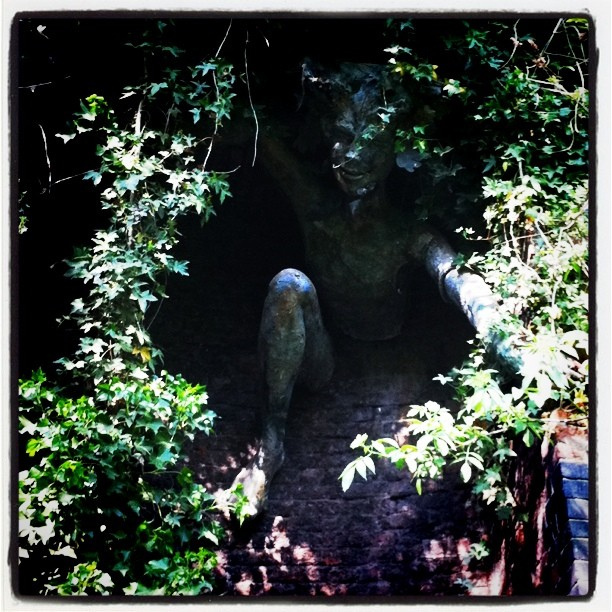 Adding further to the unique identity of the walk are very human touches, from the ever morphing multi-coloured graffiti under bridges, to the Crouch Hill Spriggan, half climbing out of the stonework in an old archway. In Katherine Briggs’ A Dictionary of Fairies, Spriggans are described as ‘grotesquely ugly’ creatures, a kind of guardian sprite; not to be confused with Green Men. This one, sculpted by Marilyn Collins, has an unnerving, half-sneering grin, but perfectly embodies the feeling of somehow being between two states, or types of place, that you can pick up on the walk. 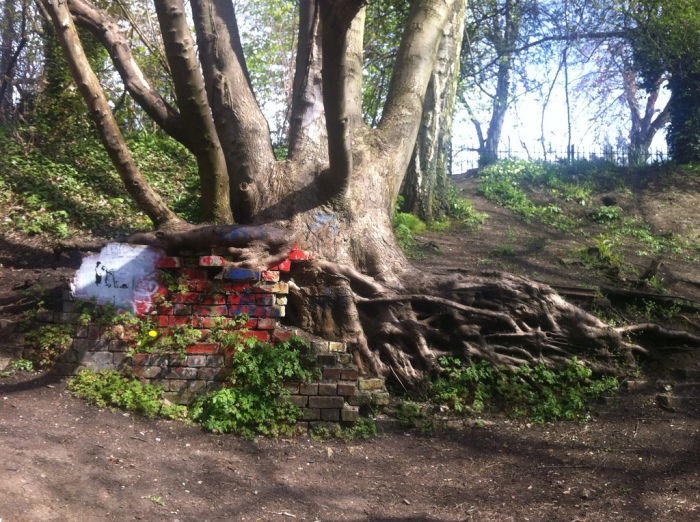 Reinforcing this edge lands feel, are the various bits of former railway paraphernalia that suddenly reveal themselves along the way, in eruptions of stone platform, or piles of crumbling brickwork. They remind me, on a much smaller scale, of the miles of ruined stone walls – remnants of old farms – that can be found in the woods of New England in North America. Some of these can be seen along the New York state and Massachusetts section of the Appalachian trial. Susan Allport writes in Sermons in Stone: The Stone Walls of New England and New York – “Hikers come across stone walls in the woods and are surprised, puzzled until they dig back in their minds for the key that opens the lock of these mysterious works of backbreaking effort, as out of place and evocative as a shipwreck on the ocean floor.”

Most fascinating and seemingly out of place of all for me are the blocked-off tunnels at Highgate, (currently being turned into a dedicated bat hibernation site), which gated and ironclad as they are, always feel more like an invitation than the end of the line. 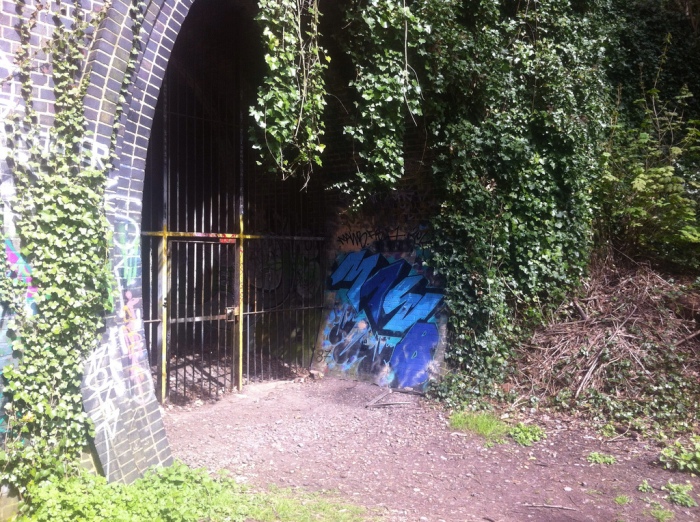 The Friends of Parkland Walk

11 thoughts on “Along the not so old straight track”