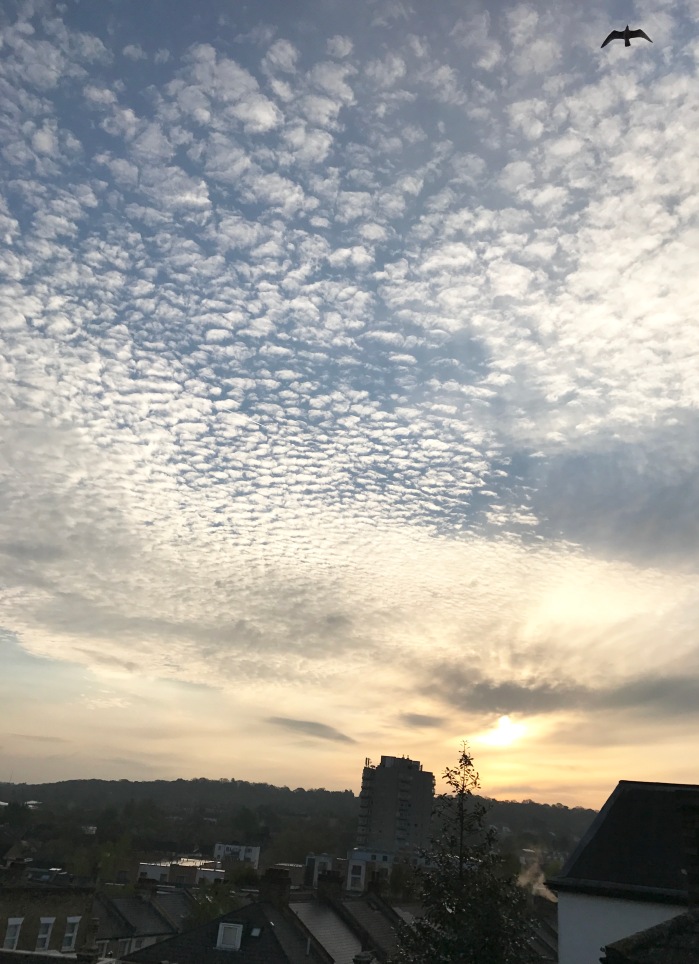 I had a Charlie Brown moment this morning.

Up early, I glanced out of the window and was struck dumb by the sky.

From the east, with the sun rising behind it, was a suspended area of marbled cloud.

The clouds were strung for perhaps two miles from Dulwich Woods on the Norwood Ridge, arcing up and stretching west towards where I was standing.

Like Good Ol’ Charlie Brown, (who’s flailing inability to frame a satisfactory simile for cloud shapes, in the face of more precocious/pretentious offerings from Linus and Lucy is brilliantly, humanly skewered in this cartoon), no clever comparisons came to me, just a raw visual sense of something momentarily amazing.

I tried to fix this sky in a photo, which of course, as discussed here before, can never do the moment justice.

Then, a long ago science lesson came to mind, a gang of bored 13 year olds, out in the field behind school in Bristol, with Mr Gaynor jokingly telling us that the cloud formations we were looking at were called ‘clumpy clouds’.

This was, I suppose, a ‘mackerel sky’, or more technically – cirrocumulus or altocumulus cloud formations. As with idioms, I love that different cultures have their own particular ways to describe such phenomenon – in Britain we compare these with fish, in Germany and France this type of cloud is apparently referred to as ‘sheep-cloud’ (Schaefchenwolken and nuages moutonneux, respectively).

Yet these airy splashes seemed to me less like fish scales, or fields of sheep, than foam on breaking waves, or even the tendrils of a vast, sky-bound spider’s web. And yes, perhaps if you looked a little closer, the odd Ducky or Horsey could be seen waddling or prancing in between the gaps.

I wondered which poets might have caught the magic of such a sight and flicked urgently through Katherine Raine and then, remembering a fantastically wind and sky obsessed chapter in Alexandra Harris’ Weatherland, turned to Shelley. There was someone who revelled in the joy of looking up.

Even The Cloud with its heart-aching “I am the daughter of Earth and Water/And the nursling of the Sky” or “Sunbeam-proof, I hang like a roof“, paled like a ghost, or an insubstantial echo, in the face of the real, fleeting awe of the thing itself.

Within fifteen minutes the gaps were filled, the light had changed and this singular patch of sky was gone.