There is a small wood a couple of streets from where I live. On the surface there’s nothing special about it. It’s a spinney really, not being big enough to count as a wood. There are other, larger green spaces nearby; Finsbury Park, Stationer’s Park and Parkland Walk – a former railway track that’s now a long distance path – essentially a park stretched out in a long line – which leads ultimately to Highgate and Queens Woods. Proper Woods.

But there is something special about this one. Granville Road Spinney is a short walk from Finsbury Park tube. Busy, dirty, gritty, inner city London is minutes away from a place where bats, hedgehogs, frogs and foxes can be found.

On the outside edge is a small meadow area, while Sycamore, hazel and wild plum trees grow in the middle. Beneath these you can find bluebells, and blackberrys, alongside a range of other plants: all within less than half a hectare of land.

Step inside, walk a few yards towards the middle and the loudest noise is birdsong. Robins, Chaffinches, Goldfinches, Great Tits, Blue Tits and Long-tailed Tits, can be heard and sometimes seen.

There were houses here once; until they were destroyed in a World War II air-raid. They were replaced by pre-fabs, then in the 1980s these were demolished and the land allowed to revert to a more natural state – albeit in the middle of a street in suburban North London. 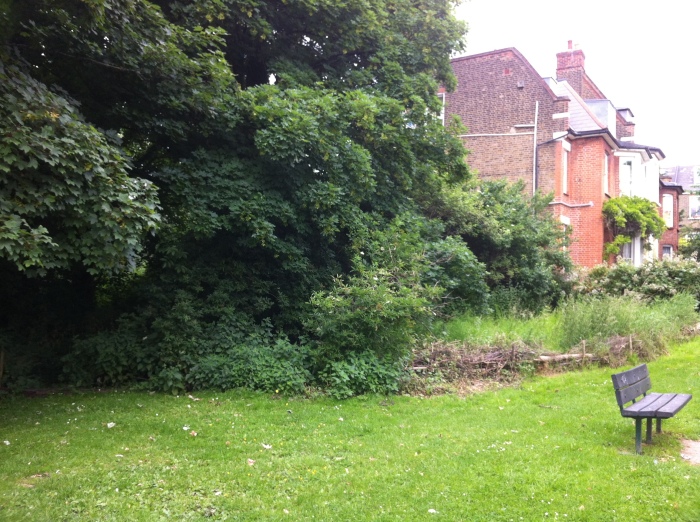 I like the inbetweenness of the spinney, it’s not rural or wild – it’s managed by the local council and volunteers – broken glass and other signs of illicit teenage or other drinkers are easy to spot.

This to me though is what makes it special. A tiny pocket of wood, interrupting marching rows of Victorian redbrick semis, is delightfully unexpected.

A couple of paths meander in and out, sometimes leading you past a pair of plastic garden chairs, they change position within the spinney often but are usually placed side by side and occasionally joined by a third. There’s something incongruous about them, lending these manufactured objects the air of a Narnian Lampost; as if marking out the spinney’s transitional status, declaring it a special space that exists halfway between London N4 and somewhere else.

I like to imagine that this small patch of wood could share qualities with the Manchester house in Alan Garner’s Elidor, acting as a gateway to another world. Or perhaps a tiny cousin to Ryhope Wood, the strange shifting realm at the heart of Robert Holdstock’s magnificent Mythago Wood.

I also enjoy the glimpse Granville Spinney offers of a city post-civilisation – a kind of tangled and overgrown wasteland – in the manner of Richard Jefferies’ After London.

But such fancies aside, there’s a more ordinary, everyday enchantment to be found here. I remember a wonderful TV series called The Wild Side of Town in the 1980s, which was all about this kind of place. Presented by environmentalist Chris Baines, it explored urban wildlife and was the first programme I’d ever seen that regarded it as important in its own right.

This wasn’t about going out into the countryside, or travelling to distant exotic locations, this was nature on your doorstep – foxes under sheds, plant life thriving on canal towpaths, wild grasses and meadowlands growing on Brandon Hill in the middle of Bristol.

Fortunately it’s possible to find patches of ground like this in cities all over the world. Sometimes they are allowed and encouraged by local authorities, more often, they are happy accidents.

It’s a habit of mine to track them down. Here are a couple of other examples I like. If you know of more it would be great to create a list of them and even a map. Not far from Granville Road Spinney, is another, small wood in the middle of Islington called Barnsbury Wood, while just off lower Manhattan’s Bleecker Street, in the West Village, there’s a small area of woodland called Time Landscape, an artist’s project designed to recreate the island’s pre-17th century habitat, with birch, beech, oaks and elm encouraged to grow within a small area on the edge of an otherwise heavily built-up city block.

I stumbled across it once when wandering around on holiday and found something magical in the jarring contrast between the dense high rise buildings that dominated the street and this mini wood apparently randomly popping up in between them. 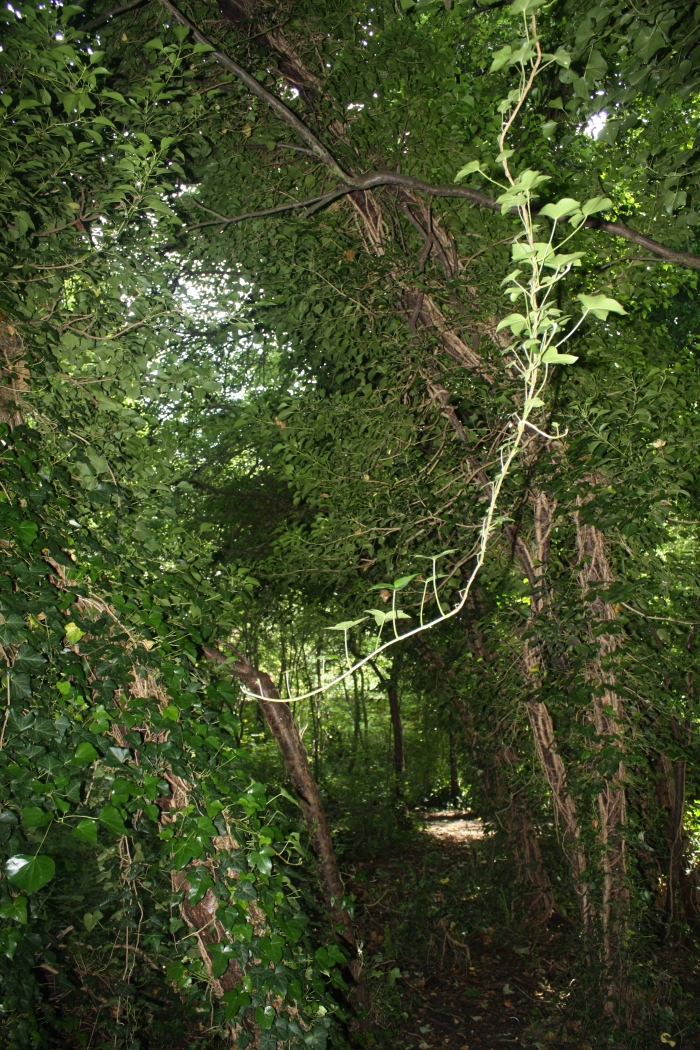 There’s something inherently exciting about such eruptions of semi-wild ground, wherever they appear. They add character to an area and help make it distinctive. They are reminders of a wider, older, world that exists within and around the ever-expanding, market-driven built environment of concrete, tarmac, plastic and metal. We should cherish them.

Get involved with the local conservation group

Chris Baines/Wild Side of Town

2 thoughts on “Deep inside the forest round the corner.”