Dalston has long felt restless; the air crackling around the edges, as if something is about to happen. I used to live there, for around five years from the mid-nineties to the millennium.

One of my favourite places was Ridley Road; that slightly crazed, buzzing, assault-to-the-senses site of a street market. Over the last decade or so this part of London has changed enormously. I went back recently to see if Ridley Road has stayed the same.

For a long while Dalston seemed a little out of it; out of kilter, off centre, not quite at the heart of things. I remember once seeing an estate agent’s notice describing E8 as ‘Islington borders’, as if it wasn’t quite somewhere in it’s own right.

This apparently tentative status has been reflected in film and literature. In Mike Leigh’s ‘Naked’ (1993) David Thewlis’ Johnny flees Manchester for Dalston. His ensuing back-street odyssey highlights the seamier, bedsit land, transitory nature of the area at the time.

Victor Headley’s 1992 novel ‘Yardie’ shows another aspect. The book centres around D, a gangster, who upsets his associates when he fails to direct the proceeds of the cocaine he’s smuggled in from Jamaica to the intended recipients and keeps it for himself. This kicks-off a series of violent encounters between various bad boys from different sides as they chase the booty; wreaking havoc and vengeance as they rage around the mean streets of Hackney. The fast-paced action is underlined by nicely observed details of life in the community that D and co crash and trample their way through, in their greedy fight for money and status.

It seems writers have long noted something shifting and temporary about Dalston. Alexander Baron’s The Lowlife (1963), set some thirty years before Leigh and Headley’s stories, has an atmosphere thick with a sense of impermanence, as if the area is merely a staging post to somewhere else.

The novel describes Dalston as “Victorian-Edwardian suburb, swallowed up by London”. Its central character is Harryboy Boas, a troubled east London gambler – who’s addiction inevitably gets him into trouble with the local criminal fraternity.

Baron’s description of the idle rhythms of Harryboy’s life are brilliant; whether he’s following up a betting tip, expounding homespun philosophies to the Deaner family who live in the same boarding house, visiting his sister, or his thoughts turning to a darker more disturbing past and present, The Lowlife is a joy to read.

Moving closer to the present day and reflecting the increasing hipness of this part of the world; Jamie Thraves, film The Lowdown (2000), sees Aidan Gillen as prop maker Frank mooching about the streets of North East London in a kind of Naked-lite. Here the darkness of Johnny’s world is replaced with frustrated middle-class ennui; it’s more sulky existential angst at closing time than desperate survival amongst the lost.

In the dozen years since The Lowdown, the pace of change in Dalston has accelerated. It’s now described by Time Out as ‘North East London’s Pocket of cool’. This probably means the true centre of cool has moved elsewhere, but the place has been busy: high rise flats such as those on the Holly Street estate have been blown up, reclad and reinvented, while elsewhere the march of loft-style, canal-side, executive apartments continues apace. Even the famous Dalston Peace mural – lately the cover star of Rudimental’s album ‘Home’ – is potentially under threat, although Hackney Council insist that this is not the case.

Much of this massive change has been accelerated by the reopening of Dalston Junction Station, as part of The East London Line, which has transformed the once shabby junction of Dalston Lane and Kingsland Road. Though regeneration on such a massive scale with the accompanying investor friendly tower blocks perhaps of more benefit to property developers than the existing local community. Further down Dalston Lane the Georgian Terracing between 48-67 behind the old shops looks set to be demolished for yet more luxury apartments, no doubt designed to appeal to yet more wealthy foreign investors looking to add to their London property portfolio, at the expense of those who would actually like to live in the area.

Not far away, the formerly scruffy, down-at-heel Broadway Market has metamorphosised. The old stalls and shops replaced with boutiques, art galleries, artisan bread sellers and self-consciously hip coffee hang-outs. The only threat emanating from The Cat and Mutton nowadays is the embarrassment of looking out of place, in the wrong kind of trousers.

I wondered if the same thing happened to Ridley Road. Looking at comments on some listings sites, it seems that the market has gone down a bit in some people’s estimation, or has failed to live up to their expectations – it certainly wasn’t the ‘little Lagos’ one person was hoping for. 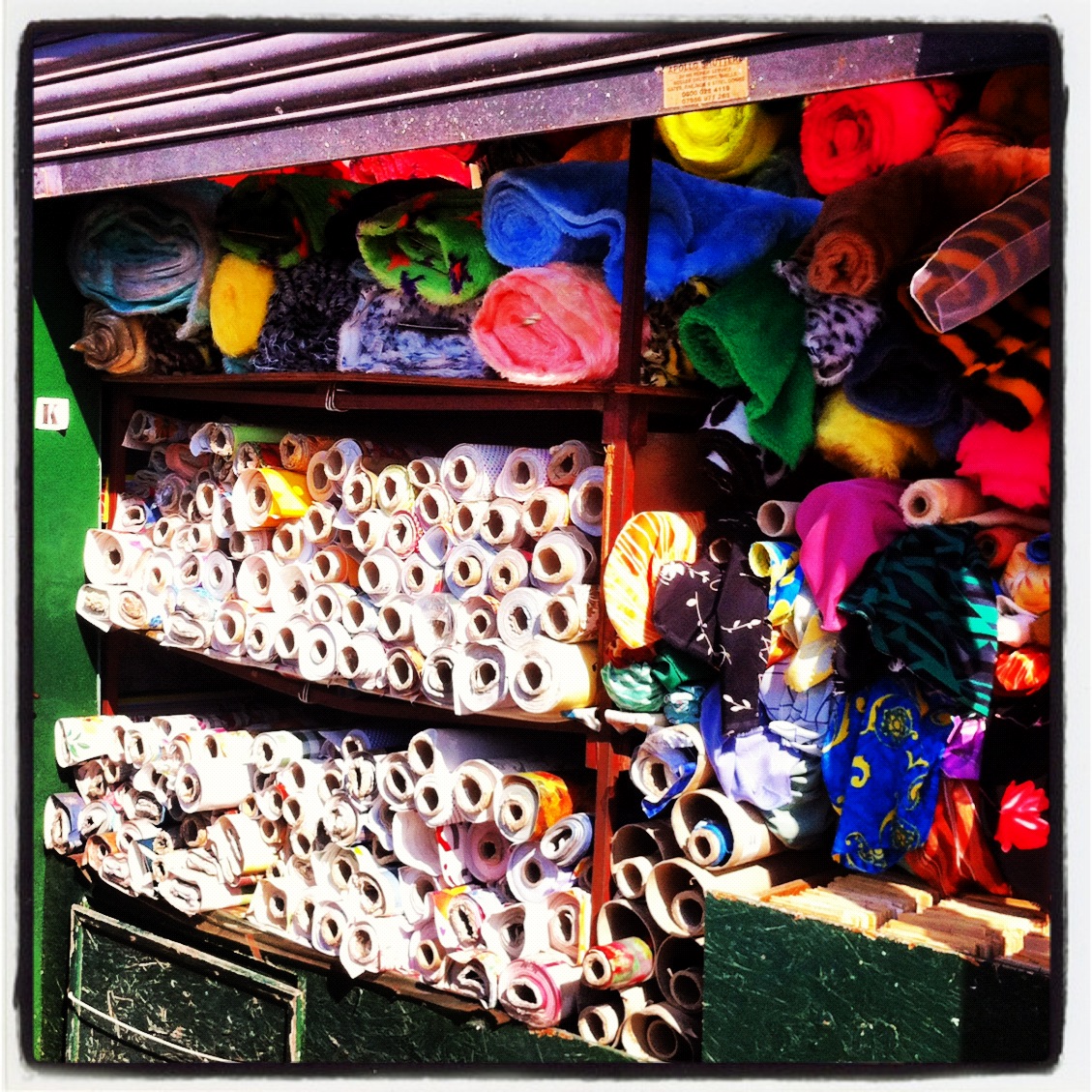 Something I always loved about it, was the contrast between the bustling market of the day and the empty, ghostly feel of the street at night. After dark, things are very different there. Bits of squashed fruit and other unsavoury items of market-waste, missed by the street cleaners lie scattered on the ground. Broken pallets are propped against empty barrows, some chained up, others left to drift on wonky rollers. On one side of the road the boarded-up shacks become empty animal cages, abandoned by a long-departed travelling circus.

During the day though, the market sprang to life – on Saturdays in particular.

I was pleased to discover last weekend that this still seems to be the case, especially if you arrive around lunchtime. Whether you squeeze off a 236 bus at St Mark’s Rise, or arrive from Kingsland Road to face the chaos, you’re hit by a blast of frantic commerce.

If you’re not in a hurry, negotiating your way through can be an exhilarating experience. Stereos thump out a mix of reggae and Afro beats, Essex greengrocers bellow inducements to buy punnets of strawberries or bags of potatoes. You’ll thread past Halal butchers, stalls punting Nigerian movies, Jamaican t-shirts, CDs, suitcases, rolls of fabric, cheap toiletries, toys, fish and bagels. 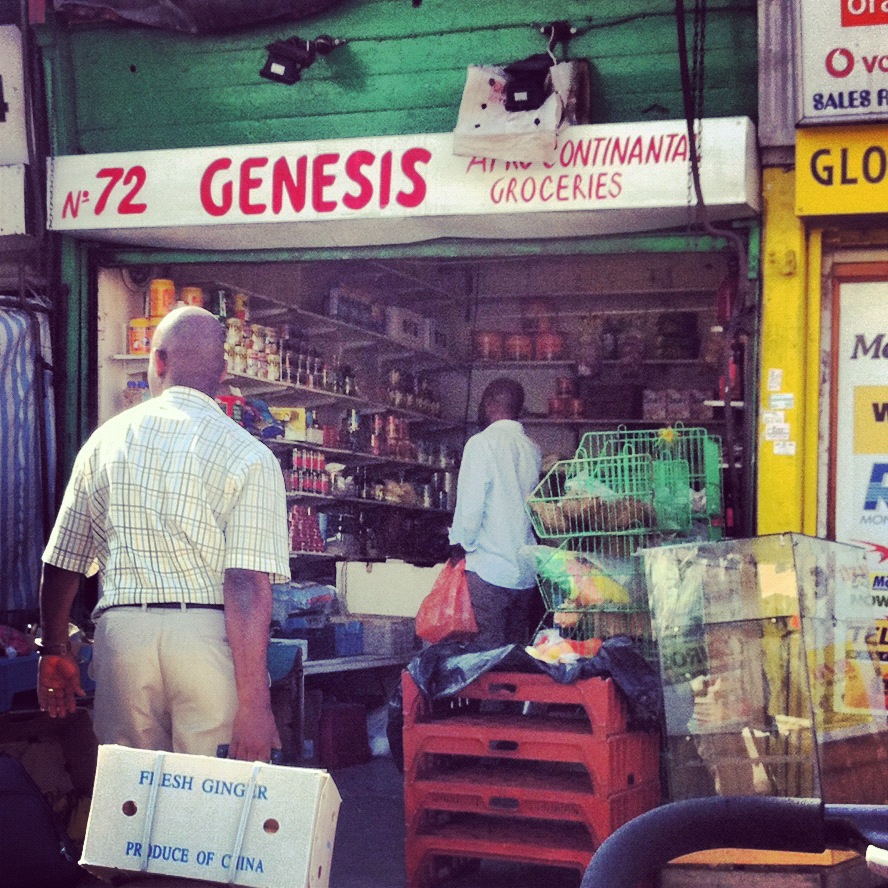 Take care on the way not to have your ankles whacked by an impatient parent’s pushchair, or cyclist trying to avoid having to dismount. You may find yourself at times stuck behind pairs of old ladies pursing their lips at the delicate business of selecting a pound of sweet potatoes. Behind them a queue builds. Nearby others are picking over ackee, dried fish, pigs’ trotters and tripes, while a few stalls along beauty products and hair extensions, batteries, puffa jackets and brands of jeans you’ve never heard of are eyed and poked and tested for quality.

According to a BBC London report from September 2012 you may also encounter some things you’d really rather avoid, like illegal “smokies”, bush meat and even rats.

Today, despite the incursion of a hip bar or two, Ridley Road, retains a feel that’s still a bit rough around the edges, even slightly chaotic, so it seems appropriate that when the market began in the 1880s, it was opened by a policeman blowing on a whistle: ‘Let the rumpus begin’.

Ridley Road seems, so far, to have shrugged its shoulders at the building work and redevelopments down the road and got on with business. It’s not a tourist destination like Camden, or a boutiquey, upwardly mobile market like London Fields’ Broadway.

What’s great about it is the raw vitality of the place. Brash and raucous it carries on pulsing at the heart of Dalston, as the cries of at least a dozen nations rise and fall amongst its ramshackle stalls and shops.

My poem, above also appears on the Fevers of the Mind site

Time Out Guide to Dalston

Fevers of the Mind – my poem ‘Ridley Road’