Going down to the mill is something we do every time we come here. It’s a short distance downhill from Rue de la Roche, where my parents-in-law live, to the town’s second river. When the water is low, as it usually is in August, the visit also includes a walk across the stepping stones and up to the edge of the old, ivy choked water wheel.

The river is the Goire, which along with its larger neighbour La Veinne, gives this place its name – Confolens, the ancient settlement at the confluence of two rivers. The Goire joins the Vienne here, which then flows north until in turn it itself empties into the Loire, as tributary follows tributary, before, united within one big river, the conjoined waters finally meet the sea. As with all settlements by water, the rivers are central to Confolens’ identity and history – the coat of arms features a stylised image of the old Vienne bridge, replete with the fortified stone towers that once stood spaced out across its span.

Back at the mill, as we pick our way across the stepping stones, our youngest, Leo, is fascinated by the delicate imprints of waterboatmen as they move about the surface of the water. His interest makes me stop to look more closely as well and together we watch for a while as the little creatures to and fro on private river missions of their own. In May we missed them, because the Goire in Spring flows high and fast – reaching up to the weir just above the stepping stones, which were themselves submerged. 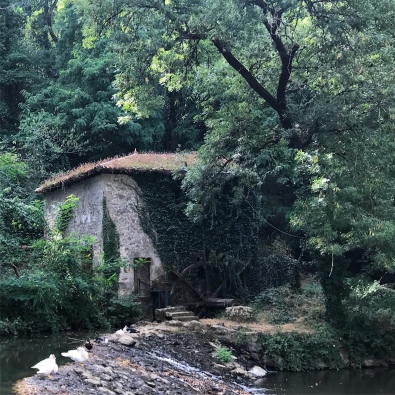 Now as summer begins to slide into autumn, the Goire is low and slow, trickling over rocks and stones in the last stretch before meeting the Vienne. Small fish dart below the surface, most probably brown trout, though zander, pike and carp are all also apparently to be found in the river. On the way to this spot past a small stone bridge at the edge of the old town, we glimpsed a sudden electric blue flash, as low above the water a pair of kingfishers zipped upstream seeking fish of their own.

We complete our crossing – Leo’s older brother Sam confidently hopping from stone to stone at speed, as Leo and I hold hands and negotiate the gaps more carefully. We gather on the far bank, when suddenly a great bird – from the corner of my eye, a raptor of some kind – lurches heavily from the foliage and turns towards the weir, landing somewhere upstream. Then after a beat it moves again, this time stopping to perch on a stump at the foot of the steep wooded hill that stretches back up towards town. Our whole family group – ten of us spanning three generations – witness the sight from different angles. After shared gasps of visceral delight, we try to work out what the bird is. At a glance the form of an Eagle, but here that would be absurd. We settle on a buzzard, which is still a pleasure to see at such close range.

In a fiction this would represent some sort of significant moment, yet here is simply a happy accident of timing. The moment’s fleeting, uncatchable thrill, is reinforced for me as I fumble pathetically for my phone to try to take a picture, as if the incident didn’t happen without a photo to fix it in time. Of course the creature is too far into the woods, too shadowed, to shoot. It is as if the bird is too primal, too real to be taken in this way.

We scramble up a worn pathway and jump across a ditch to the front of the mill. The wheel is partially overgrown with ivy and the wooden paddles at the bottom are worn and broken, like old teeth. Built in the 18th century as a tanning mill, the building eventually changed to the production of oil and supposedly still functions, though today it stands quiet and still. On the river a grey wagtail lights on a stepping stone, its tail doing exactly what the name suggests, flicking up and down like a windscreen wiper in heavy rain.

On the way back the boys are just as excited as they were by the buzzard, to see a cat stalking through the undergrowth on the opposite bank beneath the trailing limbs of willow and alder. Leo asks what the cat is doing. I say it might be after fish, or kingfishers. He then reels off a series of questions about what various things we’ve seen today eat; from waterboatmen to the buzzard. I try my best to answer, but his questions trigger a familiar thought about all the things that we didn’t see or notice in this place. Dead things, living things, rotting things. All the deep roots reaching, fungi spreading, stones and pebbles moving, tossed by the current, countless microscopic events, algae spreading and being consumed. While we look at the surface, out of sight things are mouldering, reforming, reconstituting. Thousands of small actions occurring all around us, hidden yet so precious, so precarious.

Another nagging, recurring train of thought is re-awoken, as I’m suddenly aware yet again of the apparent distance between things and their names. That huge, spreading thing over there, we call an Oak or a Willow, using small sounds that label, but somehow fail to do its vast presence justice. This object-name distance always feels heightened for me in other countries – in another language, a further set of abstract words are assigned to signify the trees and animals and objects around us: its as if here those woods can’t be woods, in France, they must be something else.

I later try to bridge the language gap a little by adding some nature vocabulary to my ancient, rusty school French. Passing this way again a few days later I take a second look at the steeply wooded bank opposite the road. This time around I note that the river’s edge here is lined mostly with Aulne and Saule Pleureur, (Alder and Weeping Willow) behind these, deliberately planted, rather than having arrived by their own means, are some huge Platane (London Plane), while amongst the water loving trees are also Sycamore – the same in French – various types of Oak – Chêne, Tilleul (Lime), Marronnier (Horse Chestnut) and some Charme (Hornbeam), which has quite possibly grown out from an abandoned hedge at the foot of high walls beneath some of Confolens’ more ancient houses.

I feel lucky when I’m granted another brief sight of the kingfishers (martin-pêcheur – appropriately non-Royals in republican France) and then at the weir (barrage) near the mill (moulin) a raft of ducks have gathered. Peering across the river I stare at the point in the foliage where the buzzard (buse) had unexpectedly burst out a few days before. Inevitably there is to be no private encore and the ducks, it seems, burst into laughter.

5 thoughts on “Un coup d’oeil: a lucky walk by a mill”