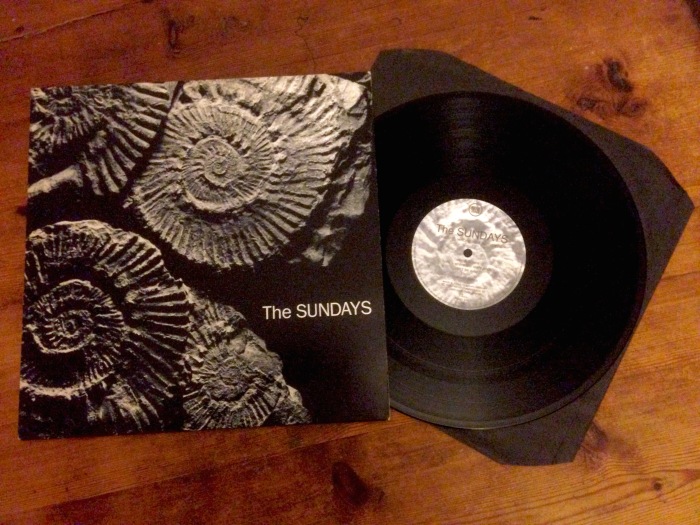 Long before FOMO (Fear of Missing Out) became a social syndrome – itself probably already out-dated, so 2009 don’t you know – when it came to music, I suffered from Fear of Being Late.

In my teens being there mattered. Having, or at least knowing about, the latest album RIGHT NOW was crucial. To my shame I was late to the Cure and late to the Smiths and countless others. But with the Sundays I got there bang on time. As soon as their first album was released in early 1990 I went out and bought it. That made them mine.

This month the album is (unbelievably) 25 years old. It was and remains a favourite, maybe even the favourite, so I’ve been listening to it again and thinking about what it means to me now.

I probably heard the single Can’t Be Sure on Radio 1 – though other than Peel, Kershaw or Annie Nightingale it wasn’t the sort of thing that they played much back then. So my anticipation had almost entirely been stoked by NME, that inky arbiter of musical taste, which I used to buy every week to find out what I needed to be listening to. In the 1980s it was harder to source the music you wanted and needed. Without Shazam, Spotify, or iTunes and the like there was no listening online first and making an instant judgement, you had to make an informed decision and go with it. This did have the advantage of allowing for growers – I was always far more likely to listen again to something if I had handed over good hard cash for it.

For long chunks of 1989 The Sundays were IT. They played awesome, sold-out gigs in important rock hotspots like The Falcon in Camden. There was a buzz about the band. Record labels were fighting over them. The Sundays, according to NME were going to be huge.

Back then, to an extent, I considered that what NME thought was important, although even in my less jaded formative years, I didn’t trust them entirely. The Wedding Present, to my mind, spent an undeserved amount of time on the front cover, being promoted as the next big thing. I knew in my bones that they were wrong. David Gedge? Meh.

The magazine also had a writer who styled himself Johnny Cigarettes, which seemed an utterly wanky and pretentious thing to do. So NME was far from infallible. And yet they were right about The Sundays, so I forgave them. 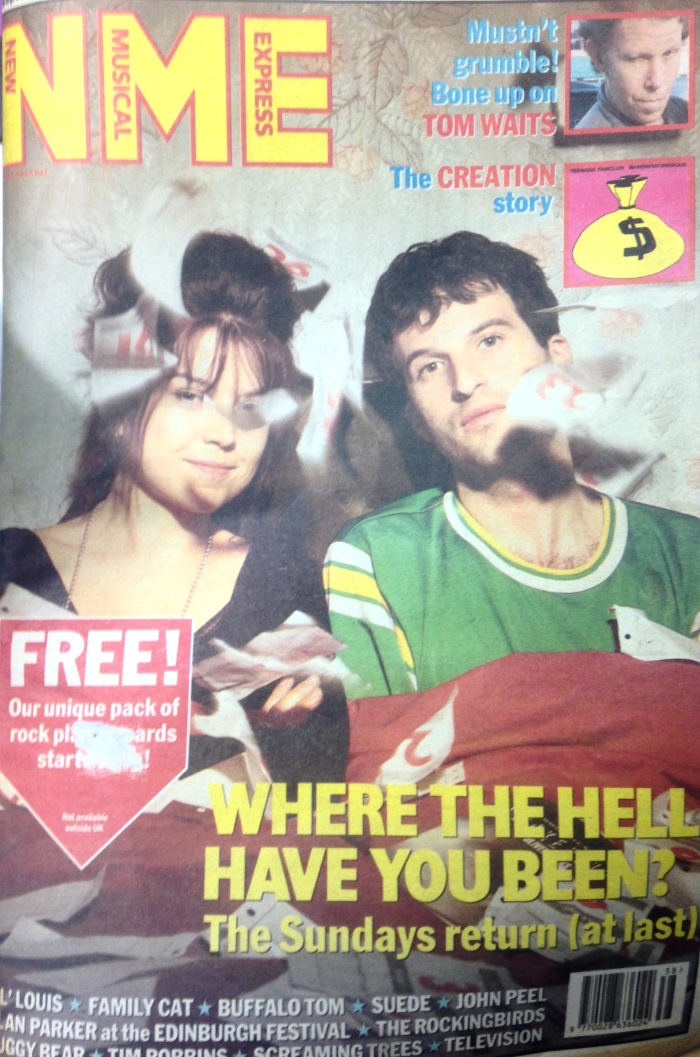 Even two years later they wanted them back

I think that I bought the record locally at Disc N’ Tape, on Gloucester Road in Bristol, though I may have gone to one of the cooler, more intimidating shops on Park Street.

Back at home the first play didn’t disappoint. The opening track Skin and Bones, began with a sonic effect that sounded like a distant plane flying overhead; somehow managing to feel both urban and real, yet ethereal and far-off all at once. Then Dave Gavurin’s plangent guitar comes in, before swirling off into the background as Harriet Wheeler’s honeyed and high, angel voice floats in to take centre stage.

Next up Here’s Where the Story Ends strikes a jangly, jaunty, Smiths-like tone that runs counter to the lyrical story of nervous, uncomfortable, outsider-dom.

Then Can’t Be Sure, a hit single in its own right, climbing high in the charts and conquering Peel’s Festive 50, but here occurring in just the right place, the synthy drums, chiming guitar and deliciously dreamy vocal, pinned to reality with its perfect evocation of yearning and ennui and uncertainty. Youthful discontent has never been articulated as sweetly.

And on they came, these brilliant, atmospheric, beautiful songs. I Won, Hideous Towns, You’re Not The Only One I Know, A Certain Someone, I Kicked A Boy, My Finest Hour, Joy.

Other than Can’t Be Sure, I can’t isolate indvidual tracks as peaks, or favourites, or less good, they all, still, seem to work perfectly together; each track flowing seamlessly into the next, yet each asserting an individuality through the lyrics and aural atmospherics. A proper album, rather than a collection of songs.

Something about this record spoke to me – seeming to directly channel my feelings about life at the time. This was the state of being young, unformed, bored in suburban Bristol, waiting for things to happen, yearning for the life and exciting times that seemed to be happening to other people, elsewhere.

The Sundays were the ideal group to identify with for a wannabe alternative teenager searching for a distinctive identity of their own – one not handed down by parents or school. In some ways they are a perfect example of the ‘indie’ band, a strand of music Stuart Maconie nails his book The People’s Songs: The story of Modern Britain in 50 Records:

“Indie offered a different narrative to the one that is generally seen as the story of the 1980s: vintage clothes, old records, bedsits, Penguin modern classics, black and white movies instead of the champagne, filofaxes and outsize mobile phones of Thatcher’s children.”

Clearly that’s a quote that could apply to many bands of the time – and the term ‘indie’ technically includes Stock, Aiken and Waterman. However, for me it stirs particular memories of discovering through guitar bands like the Sundays, Lloyd Cole and the Commotions, Echo and the Bunnymen, Aztec Camera and of course The Smiths, that there was space for a quieter, literate, witty and angst-ridden type of song alongside the bombast and pomp of other strands of 80s music.

Over the years I have continued to listen regularly to Reading, Writing and Arithmetic. I even spent quite a long time a couple of years ago tracking down a t-shirt that looked like the one I had as a student featuring the cover of the album – eventually I found a shop in Hong Kong that sold me a pair.

Now a fair distance from those teenage years, I no longer feel quite the same kind of earnest, loss-before any loss sense of empty yearning, that the album once appealed to, but I still love it, the sound of it, the feeling of it.

Since their debut album, The Sundays have, in a way, passed into musical legend. After their third and last album came out in 1997 they stepped off the musical treadmill of tours and promotion and cutting tracks – with Wheeler and Gavurin choosing instead to focus on bringing up their children.

This conscious disappearance lends the band a sense of romance and mystery – unlike some other bands you can’t see them as they are now, older, care-lined, no-longer the ultimate hip, alt music royals they were once, briefly, held up to be.

As a result Harriet remains the perfect fantasy indie-chick pin-up – pretty, charming, witty, intelligent and of course the owner of THAT voice – the kind of woman you could hang out with for hour after hour in back-street coffee bars talking endlessly of poetry and books and art. Gavurin stays forever the young, alternative muso god, creating shimmering, wistful beauty from a magical guitar.

Last year, out of nowhere, Wheeler and Gavurin did make an unexpected and appropriately left-field public appearance in American Way – the inflight magazine of American Airlines – giving a rare interview to a writer who’d tracked them down via Drummer Patrick ‘Patch’ Hannen

Inevitably, despite some vague comments about perhaps, you know, one day, putting some more music out there, they soon went to ground again, so the legend lives on.

Over the years The Sundays have been held up as characteristic of a particular type of shoe-gazey, dream-pop indie aesthetic, with Harriet the archetypal fey female lead singer and Gavurin the mysterious musical genius in the background.

But to me no one sounds quite like them – Mazzy Star probably come closest, but they’re really not the same.

I listen to Reading, Writing and Arithmetic today and am reminded of Joseph Heller’s answer to an interviewer who had the temerity to ask why he had never written anything as good as Catch 22 – his response “Who Has?”

9 thoughts on “Here’s Where The Story Begins: The Sundays’ Reading, Writing and Arithmetic at 25.”