Landscapes, imagined and remembered, have always played a central role in literature. In many books the place where a tale unfolds is never simply a backdrop, but is as vital and memorable a presence as the characters themselves.

This is especially true of fiction set in the British Isles, blessed with a rich variety of diverse and densely packed landscapes, surrounded by the sea.

John Fowles’ The French Lieutenant’s Woman would suffer without the exotic, tangled otherness of the Undercliff, to contrast with the starchy restraint of Victorian Lyme Regis.

Just as Heathcliff and Cathy aren’t fully alive beyond Emily Bronte’s savage moors and uplands, Tolkien’s Middle Earth needs the cosiness of the Shire (the Birmingham suburbs and Worcestershire countryside of his youth) to bring home the threat of the wild beyond; whilst the interweaving of gothic strangeness and small town history in Graham Swift’s Waterland is all the more enchanting for the wide grey horizons of its flat and bleak fenland setting.

Of course, landscape means more than rural hills and forests, cities and suburbs are crucial influences in much British fiction. Dicken’s London is more real than the actual city to many who have only ever visited through his books. More recently the enticements and promise of London are as much of an influence on Karim in Kureshi’s Buddha of Suburbia as are his father, Eva, Haroon and Charlie. In Nottingham the pubs of Alan Sillitoe’s Saturday Night and Sunday Morning are the theatre in which Arthur Seaton sets out on his acts of defiant rebellion, while their seedy counterparts in central and West London form an essential backdrop to Patrick Hamilton’s tales of frustrated lives and disappointments.

Settings have no need to be epic to be effective – a modest caravan in a wood in South Wiltshire, on the outskirts of town, is home to one of the most vital and protean characters of contemporary theatre: Johnny ‘Rooster’ Byron – Traveller, Romany, Jack-in-the-Green. Jez Butterworth’s setting, local jokes and references ensure that Rooster Byron is a living, breathing, flesh-and-blood local man, every bit as much as he is a symbolic and mythic national character.

This fascinating relationship between writers and the British landscape is currently explored in a new exhibition at The British Library: Writing Britain: Wastelands to Wonderlands from 11 May to 25 September 2012.

I’ve always been interested in this subject, particularly in the interplay between the hard, real, physical geography of a place and the emotional landscape each person who lives there or visits creates in their own mind. Two personal favourite explorations of this territory are Jonathan Raban’s Soft City and Nicholas Royle’s The Matter of the Heart – which has some very interesting ideas about ‘emotional routes’.

One landscape I’ve repeatedly found myself drawn back to is an odd little corner of Bristol called the Narroways. It’s one of those curious, liminal places that is of the city – because its in the middle of suburban Bristol, but somehow has a tang of the countryside to it.

There’s a great book that examines just this kind of place – Edgelands, Journey’s into England’s True Wilderness – by Paul Farley and Michael Symmons Roberts. It’s all about the borderlands where towns and cities blur out messily into the countryside beyond, a landscape dotted with car show rooms, shopping centres and workshops: ‘somewhere in the hollows and spaces between our carefully managed wilderness areas and the creeping, flattening effects of global capitalism’

The Narroways isn’t exactly an edgeland, because it’s surrounded by the city, but has that kind of feel – a little jarring, a little unexpected. If anything it’s more of a ‘squeeze land’ wedged in as it is between housing and transport infrastructure.

The area known as the Narroways is a triangle of green tangle tucked into a small valley in St Werburghs, caught in the embrace of road and railway tracks. Strictly speaking the valley is Ashley Vale and a little to the east of this is a grassy hill -Narroways Hill itself – hence the name, which affords views towards the city centre and beyond. In between, nature has taken the opportunity to fill in the gaps, with scatterings of woodland – mainly Ash, Sycamore trees and bramble thickets. The valley’s name comes from the trees – Ashley Vale – derives from a former estate here called Asselega – the Anglo Saxon ‘aesc’ meaning ash tree and ‘leah’ – wood.

For more detail on the history of the area there’s an excellent article by Harry McPhillimy in Regional Historian magazine – Issue 8, winter 2002. (where I found some of the factual information for this article).

The land came under threat in the 1990s when Railtrack were going to sell it to developers, but a major public protest – 800 people gathered on the hill in 1997 – and petitions signed by thousands eventually saw the area granted Millennium Green Status in 2000.

I first discovered it in the late 1980s because there was an excellent pub right in the middle – The Farm. My favourite view when approaching the Narroways was from Hurlingham Road just off Ashley Hill, from where you can see almost the whole area. At dusk looking eastwards you can follow the lines of yellow city street lights before they shade into a blur of car headlamps as the last vertical lumps of suburban Bristol slide into the flat concrete of the M32.

Apart from a single road at the south eastern end of the valley, the only way in is on foot, via a choice of narrow, leafy lanes, running through allotments, often patrolled by adventurous cats flitting amongst the bean stalks and cabbage patches.

At the bottom, in the middle of the valley is St Werburghs City farm and the pub. When I was about 18 this seemed about the perfect place to escape to, and along with my friends Chris and Tom, I would descend through the lanes to drink pints of Ushers. Then we were usually by far the youngest people in the pub, but kept away from the greying locals by attempting to play bar billiards in a little back room. 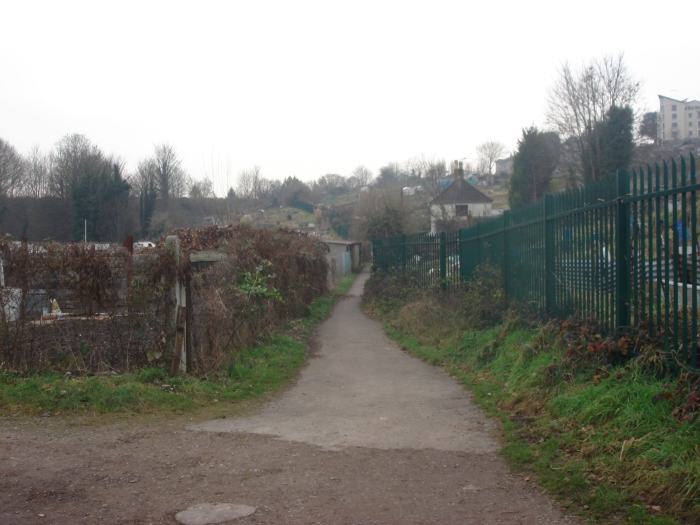 In summer you could sit on benches in small sheds in the garden – we used to argue about what these had been used for – pigs or cows. It didn’t really occur to us that they might simply have been built expressly for the use of outdoor drinkers.

‘The Farm’ pub is still there– often packed out with a much younger, more vibrant crowd than it used to be and it remains a great place for a pint or two on a summer (or winter) night.

For me the attraction of the place was and remains the promise of escape without leaving, allowing a moment’s pause in a place somehow miles away from the city that surrounds it.

Writing Britain: Wastelands to Wonderlands from 11 May to 25 September

BBC slideshow including some of the manuscripts featured:

5 thoughts on “Into the Narroways – a landscape of words”